MicroRNA-122 (miR-122), which accounts for 70% of the liver’s total miRNAs, plays a pivotal role in the liver. However, its intrinsic physiological roles remain largely undetermined. We demonstrated that mice lacking the gene encoding miR-122a (Mir122a) are viable but develop temporally controlled steatohepatitis, fibrosis, and hepatocellular carcinoma (HCC). These mice exhibited a striking disparity in HCC incidence based on sex, with a male-to-female ratio of 3.9:1, which recapitulates the disease incidence in humans. Impaired expression of microsomal triglyceride transfer protein (MTTP) contributed to steatosis, which was reversed by in vivo restoration of Mttp expression. We found that hepatic fibrosis onset can be partially attributed to the action of a miR-122a target, the Klf6 transcript. In addition, Mir122a–/– livers exhibited disruptions in a range of pathways, many of which closely resemble the disruptions found in human HCC. Importantly, the reexpression of miR-122a reduced disease manifestation and tumor incidence in Mir122a–/– mice. This study demonstrates that mice with a targeted deletion of the Mir122a gene possess several key phenotypes of human liver diseases, which provides a rationale for the development of a unique therapy for the treatment of chronic liver disease and HCC. 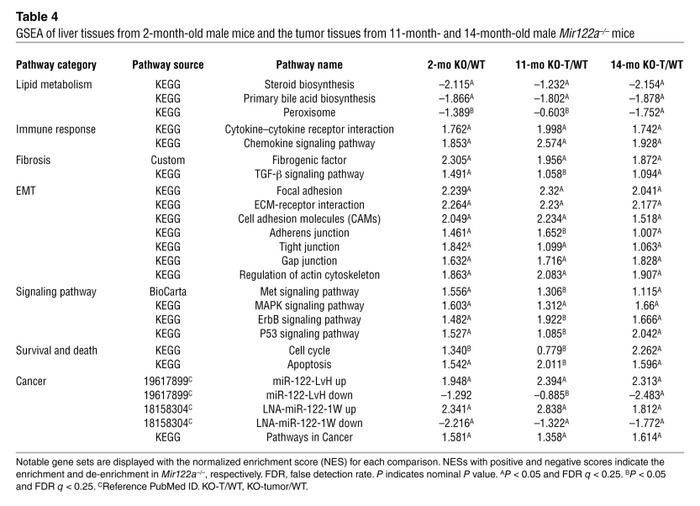