This article discusses current understanding of myocardial biology, emphasizing the regeneration potential of the adult human heart and the mechanisms involved. In the last decade, a novel conceptual view has emerged. The heart is no longer considered a postmitotic organ, but is viewed as a self-renewing organ characterized by a resident stem cell compartment responsible for tissue homeostasis and cardiac repair following injury. Additionally, HSCs possess the ability to transdifferentiate and acquire the cardiomyocyte, vascular endothelial, and smooth muscle cell lineages. Both cardiac and hematopoietic stem cells may be used therapeutically in an attempt to reverse the devastating consequences of chronic heart failure of ischemic and nonischemic origin. 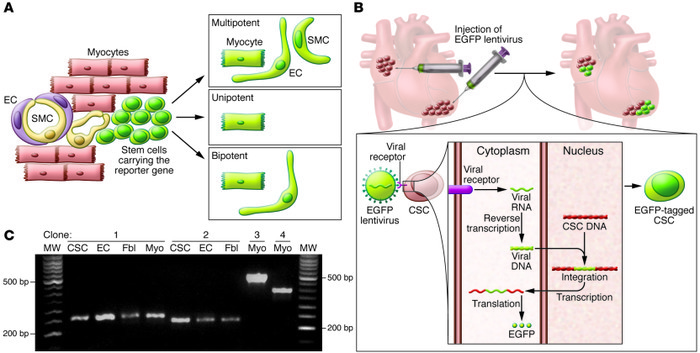 () Representation of fate mapping involving the use of a fluorescent reporter gene (EGFP, green) driven by an inducible promoter coding for a stem cell–specific protein. Following differentiation and loss of stem cell antigen, myocytes, ECs, and SMCs continue to express EGFP, indicating a lineage relationship between ancestors and descendants. However, the labeled progeny may derive from activation of one or several stem cells, failing to document the multipotency of the parental stem cell. () Representation of viral gene tagging. Infection of CSCs with EGFP lentivirus results in the semirandom insertion of the proviral integrant in the genome of the recipient cell. Transcription and translation of the viral DNA result in expression of EGFP and fluorescent labeling of the infected CSCs. The unique insertion site of the viral genome is inherited by the entire population derived from the parental cell and can be amplified by PCR. CSCs nested in atrial and apical niches were labeled in situ to identify their progeny in vivo. () Four distinct clones were identified in EGFP-tagged CSCs, ECs, fibroblasts (Fbl), and cardiomyocytes (Myo) isolated from the ventricle of one mouse heart. Multiple PCR products (bands in agarose gel) were identified. Bands of the same molecular weight correspond to identical sites of integration of the proviral sequence in the host genome of CSCs, myocytes, ECs and fibroblasts, documenting the multipotency of CSCs in vivo. Reproduced with permission from (ref. ; copyright 2009, National Academy of Sciences, USA).