An interesting variant of familial glucocorticoid deficiency (FGD), an autosomal recessive form of adrenal failure, exists in a genetically isolated Irish population. In addition to hypocortisolemia, affected children show signs of growth failure, increased chromosomal breakage, and NK cell deficiency. Targeted exome sequencing in 8 patients identified a variant (c.71-1insG) in minichromosome maintenance–deficient 4 (MCM4) that was predicted to result in a severely truncated protein (p.Pro24ArgfsX4). Western blotting of patient samples revealed that the major 96-kDa isoform present in unaffected human controls was absent, while the presence of the minor 85-kDa isoform was preserved. Interestingly, histological studies with Mcm4-depleted mice showed grossly abnormal adrenal morphology that was characterized by non-steroidogenic GATA4- and Gli1-positive cells within the steroidogenic cortex, which reduced the number of steroidogenic cells in the zona fasciculata of the adrenal cortex. Since MCM4 is one part of a MCM2-7 complex recently confirmed as the replicative helicase essential for normal DNA replication and genome stability in all eukaryotes, it is possible that our patients may have an increased risk of neoplastic change. In summary, we have identified what we believe to be the first human mutation in MCM4 and have shown that it is associated with adrenal insufficiency, short stature, and NK cell deficiency.

Cell lysates from both control and patient lymphocytes show evidence of MCM4 protein. 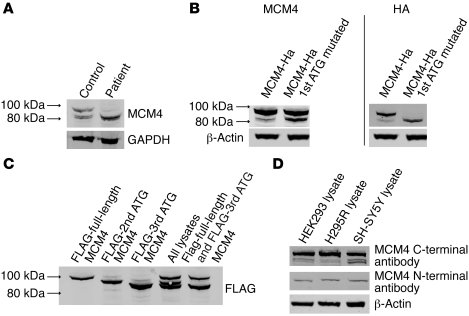 () Lysates from patient and control human lymphocytes were immunoblotted with an anti- MCM4 antibody. While control subjects have two main protein species, of approximately 96 and 85 kDa, the predicted full-length 96-kDa product is missing in the patients. () HEK293 cells were transfected with full-length MCM4 or MCM4 with the first methionine mutated, both of which were tagged with a C-terminal HA tag. The lysates were then blotted with both MCM4 antibody (left panel) and HA antibody (right panel). Abolition of the initiating methionine of MCM4 leads to expression of a smaller MCM4 species, of approximately 85 kDa. () FLAG-tagged full-length MCM4 and constructs beginning at the second and third in-frame ATGs were expressed in HEK293 cells. Lysates from each were run individually (lanes 1–3), all together (lane 4), or in combination with the full-length and third ATG (lane 5) and immunoblotted using an anti-FLAG antibody. The relative mobility of the different species indicates that the smaller MCM4 species may be produced by translation from the third in-frame ATG. () Different cell lysates show evidence of both the major full-length and smaller MCM4 isoforms when immunoblotted with the MCM4 C-terminal antibody. However, when the same lysates are immunoblotted with the N-terminal antibody, the smaller MCM4 isoform is no longer seen, suggesting that the smaller isoform is missing the N terminus of MCM4.