An interesting variant of familial glucocorticoid deficiency (FGD), an autosomal recessive form of adrenal failure, exists in a genetically isolated Irish population. In addition to hypocortisolemia, affected children show signs of growth failure, increased chromosomal breakage, and NK cell deficiency. Targeted exome sequencing in 8 patients identified a variant (c.71-1insG) in minichromosome maintenance–deficient 4 (MCM4) that was predicted to result in a severely truncated protein (p.Pro24ArgfsX4). Western blotting of patient samples revealed that the major 96-kDa isoform present in unaffected human controls was absent, while the presence of the minor 85-kDa isoform was preserved. Interestingly, histological studies with Mcm4-depleted mice showed grossly abnormal adrenal morphology that was characterized by non-steroidogenic GATA4- and Gli1-positive cells within the steroidogenic cortex, which reduced the number of steroidogenic cells in the zona fasciculata of the adrenal cortex. Since MCM4 is one part of a MCM2-7 complex recently confirmed as the replicative helicase essential for normal DNA replication and genome stability in all eukaryotes, it is possible that our patients may have an increased risk of neoplastic change. In summary, we have identified what we believe to be the first human mutation in MCM4 and have shown that it is associated with adrenal insufficiency, short stature, and NK cell deficiency.

Pedigree and linkage analysis of 3 affected kindreds and identification of a mutation in leading to a truncated protein p.Pro24ArgfsX4. 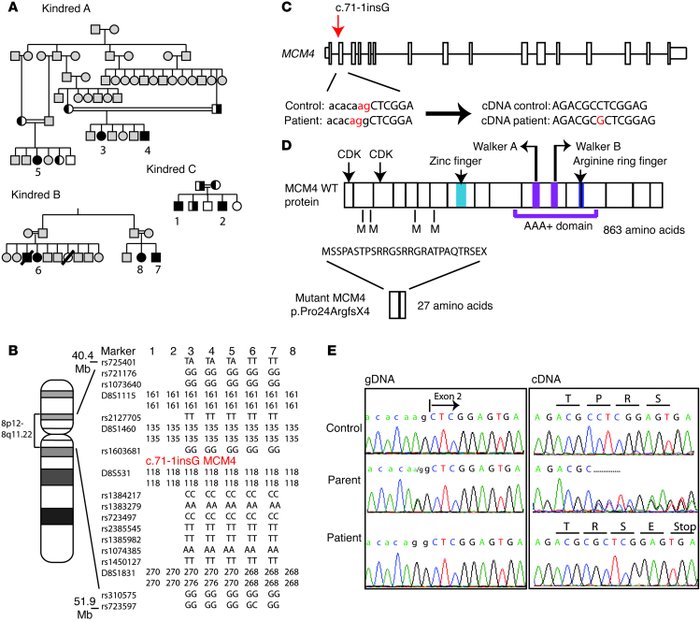 () Pedigree of affected patients. () SNP and microsatellite genotyping of chromosome 8p12.2–q12.3 locus surrounding . Genotyping was not carried out on patients 1, 2, and 8. () Gene structure of (top). The location of the mutation, c.71-1insG, prior to exon 2 (red arrow), which leads to a shift in the consensus splice site (nucleotides ag in red) and the introduction of an extra G into patient mRNA/cDNA (shown below), is indicated. () Protein structure of MCM4 indicating (top) the positions of the two cyclin-dependent kinase (CDK) binding domains, zinc finger, Walker A and B motifs, and an arginine ring finger; these motifs are conserved across all MCMs and are essential for MCM4 functionality. Also indicated are 4 in-frame methionines (M). The predicted consequence of the c.71-1insG mutation leading to premature truncation of the protein at amino acid 27 (p.Pro24ArgfsX4) is shown (bottom). () Partial sequence chromatograms showing (left) the intron 2–exon 2 junction in genomic DNA from control, parent, and patient (intronic bases in lowercase, exonic in uppercase). Arrows indicate the base change from A to G and (right) cDNA from control, parent, and patient indicating wild-type, mixed, and mutant cDNA sequences, respectively, the latter resulting in a premature stop codon.