Mutations in the E3 ubiquitin ligase tripartite motif-containing 32 (TRIM32) are responsible for the disease limb-girdle muscular dystrophy 2H (LGMD2H). Previously, we generated Trim32 knockout mice (Trim32–/– mice) and showed that they display a myopathic phenotype accompanied by neurogenic features. Here, we used these mice to investigate the muscle-specific defects arising from the absence of TRIM32, which underlie the myopathic phenotype. Using 2 models of induced atrophy, we showed that TRIM32 is dispensable for muscle atrophy. Conversely, TRIM32 was necessary for muscle regrowth after atrophy. Furthermore, TRIM32-deficient primary myoblasts underwent premature senescence and impaired myogenesis due to accumulation of PIAS4, an E3 SUMO ligase and TRIM32 substrate that was previously shown to be associated with senescence. Premature senescence of myoblasts was also observed in vivo in an atrophy/regrowth model. Trim32–/– muscles had substantially fewer activated satellite cells, increased PIAS4 levels, and growth failure compared with wild-type muscles. Moreover, Trim32–/– muscles exhibited features of premature sarcopenia, such as selective type II fast fiber atrophy. These results imply that premature senescence of muscle satellite cells is an underlying pathogenic feature of LGMD2H and reveal what we believe to be a new mechanism of muscular dystrophy associated with reductions in available satellite cells and premature sarcopenia.

Apoptosis is not impaired in skeletal muscles. 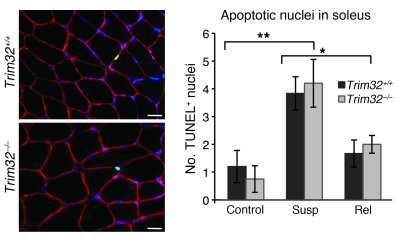 TUNEL labeling was performed, and TUNEL-positive apoptotic nuclei (green) were quantified in entire soleus muscle cross sections. To visualize muscle fibers and nuclei, sections were counterstained with anti-dystrophin (red) and DAPI (blue). Representative examples of the staining are shown. Scale bar: 25 μm. Four to six samples were analyzed in each group for and genotype: ambulatory control; mice subjected to 5 days of suspension; and mice subjected to 5 days of suspension followed by 3 days of reloading (rel). The number of TUNEL-positive nuclei increased during inactivity after 5 days of hind limb suspension in both genotypes compared with ambulatory controls of the same genotype (** < 0.02) and declined during reloading compared with the value observed in the suspended mice of the same genotype (* < 0.05). There was no statistical difference between the 2 genotypes at any of the time points tested. Data are shown as mean ± SEM.