Mutations in human SLC26A4 are a common cause of hearing loss associated with enlarged vestibular aqueducts (EVA). SLC26A4 encodes pendrin, an anion-base exchanger expressed in inner ear epithelial cells that secretes HCO3– into endolymph. Studies of Slc26a4-null mice indicate that pendrin is essential for inner ear development, but have not revealed whether pendrin is specifically necessary for homeostasis. Slc26a4-null mice are profoundly deaf, with severe inner ear malformations and degenerative changes that do not model the less severe human phenotype. Here, we describe studies in which we generated a binary transgenic mouse line in which Slc26a4 expression could be induced with doxycycline. The transgenes were crossed onto the Slc26a4-null background so that all functional pendrin was derived from the transgenes. Varying the temporal expression of Slc26a4 revealed that E16.5 to P2 was the critical interval in which pendrin was required for acquisition of normal hearing. Lack of pendrin during this period led to endolymphatic acidification, loss of the endocochlear potential, and failure to acquire normal hearing. Doxycycline initiation at E18.5 or discontinuation at E17.5 resulted in partial hearing loss approximating the human EVA auditory phenotype. These data collectively provide mechanistic insight into hearing loss caused by SLC26A4 mutations and establish a model for further studies of EVA-associated hearing loss.

Pendrin expression in the inner ear. 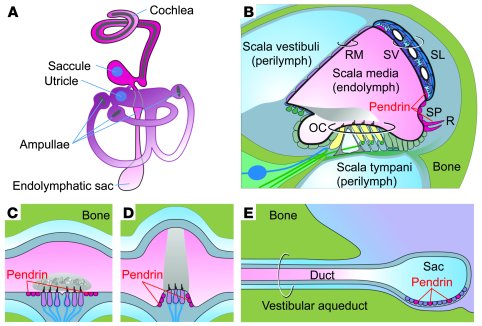 () Overview of the inner ear. The mammalian inner ear consists of the cochlea, which is the organ for hearing, the vestibular labyrinth, which is the organ for detecting linear acceleration in the saccule and utricle, and angular acceleration along 3 spatial axes in the ampullae. The membranous labyrinth (shown) is encapsulated in bone (not shown). () Cross-section of 1 turn of the cochlea. The cochlea consists of an epithelia-lined duct that is filled with endolymph. This duct is surrounded by 2 open fluid compartments that are filled with perilymph. The main structures of the cochlear duct are the stria vascularis (SV), Reissner membrane (RM), and the organ of Corti (OC). The stria vascularis generates the EP and secretes K+ into endolymph. The organ of Corti contains the sensory hair cells. Pendrin is expressed in epithelial cells of the spiral prominence (SP), in root cells (R), and in spindle cells of the stria vascularis. Cross sections are shown for the saccule or utricle (), an ampulla (), and the endolymphatic duct and sac (). The saccule, utricle, ampullae, and endolymphatic duct are epithelia-lined structures that are filled with endolymph and surrounded by perilymph. The endolymphatic sac is surrounded by cerebrospinal fluid. Pendrin is expressed in nonsensory epithelial cells surrounding the sensory hair-cell patches in the saccule, utricle, and ampulla. In addition, pendrin is prominently expressed in the endolymphatic sac.