Establishment and characterization of a virus-induced diabetes model for in vivo pancreatic CTL imaging. 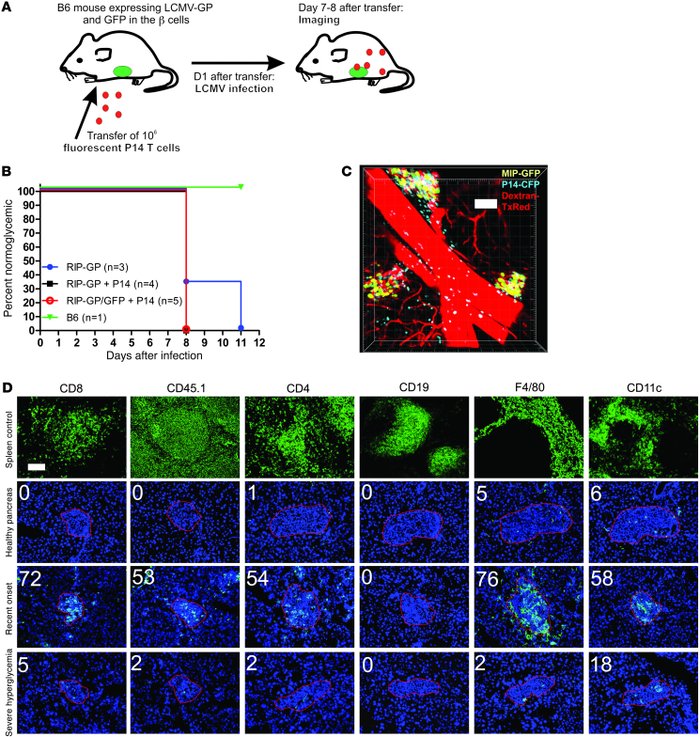 () Recipient mice expressing GFP and viral antigen on their β cells were injected with purified, naive, fluorescently labeled P14 CD8+ T cells 1 day prior to infection with LCMV. () Supplementation with TCR transgenic effectors results in a consistent synchronization of hyperglycemia onset as compared with the conventional model. () 2-Photon imaging was successful in capturing β cell mass and infiltrating CTL ideally on days 7 and 8 after infection, immediately prior to diabetes onset. Vascular staining (here pseudocolored in red) reveals the local (micro-)vascular circuit. / = 1.52/ = 5/ = 41. Scale bar: 100 μm. () Detailed immunofluorescent analysis of the cellular composition of the islet infiltrate at various stages of the diabetogenic process. Upper panel demonstrates validity of the stainings on frozen spleen sections. Transferred CD8+ T cells were detected by way of staining for the congenic marker CD45.1. Images represent consecutive sections of islets obtained at days 0, 8, and 10 after infection and are representative of 4 animals analyzed at each time point. Red outline defines approximate islet contours based on DAPI morphology for ease of interpretation. Scale bar: 100 μm.