The CBX7 gene encodes a polycomb group protein that is known to be downregulated in many types of human cancers, although the role of this protein in carcinogenesis remains unclear. To shed light on this issue, we generated mice null for Cbx7. Mouse embryonic fibroblasts derived from these mice had a higher growth rate and reduced susceptibility to senescence compared with their WT counterparts. This was associated with upregulated expression of multiple cell cycle components, including cyclin E, which is known to play a key role in lung carcinogenesis in humans. Adult Cbx7-KO mice developed liver and lung adenomas and carcinomas. In in vivo and in vitro experiments, we demonstrated that CBX7 bound to the CCNE1 promoter in a complex that included HDAC2 and negatively regulated CCNE1 expression. Finally, we found that the lack of CBX7 protein expression in human lung carcinomas correlated with CCNE1 overexpression. These data suggest that CBX7 is a tumor suppressor and that its loss plays a key role in the pathogenesis of cancer. 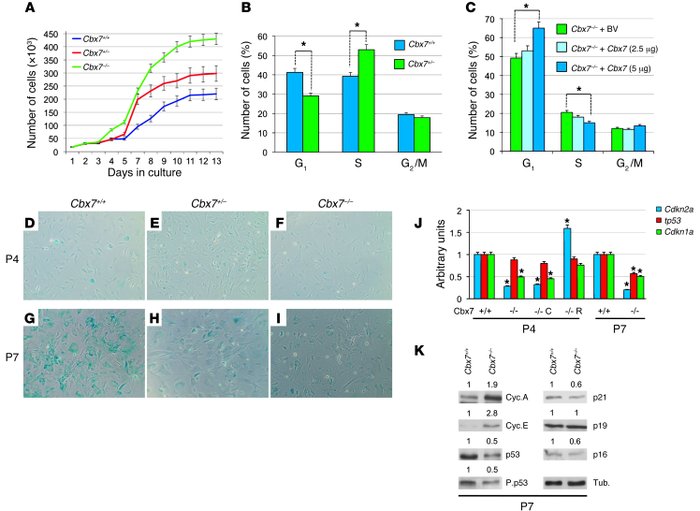 () MEFs were prepared from , , and embryos at 12.5 dpc. At culture passage 4, they were plated and counted daily for 13 days to extrapolate growth curves. Shown are mean ± SEM of 3 different cell clones (each originating from a different embryo) for each genotype. ( and ) Propidium iodide flow cytometry of asynchronous growing WT and -KO MEFs. () Percent cells in each phase of the cell cycle (mean ± SEM). * < 0.05. () FACS analysis of MEFs transiently transfected with different amounts of a expression vector or the backbone vector (BV). (–) Light microscopy of representative ( and ), ( and ), and ( and ) MEF clones stained for β-galactosidase activity at culture passages 4 (P4; –) and 7 (–). () Expression of cell cycle inhibitors , , and in representative MEFs from each genotype was determined by qRT-PCR at culture passages 4 and 7. * < 0.05. Passage 4 MEFs transiently transfected with the backbone vector (C) or whose expression had been restored (R) are also shown. () Expression of cell cycle and senescence regulators in representative MEFs from each genotype was determined by Western blot at culture passage 7. Normalized protein levels, evaluated by densitometric analysis, are indicated above immunoblots.