Dopamine dysregulation in a mouse model of paroxysmal nonkinesigenic dyskinesia

Dopamine dysregulation in a mouse model of paroxysmal nonkinesigenic dyskinesia

Paroxysmal nonkinesigenic dyskinesia (PNKD) is an autosomal dominant episodic movement disorder. Patients have episodes that last 1 to 4 hours and are precipitated by alcohol, coffee, and stress. Previous research has shown that mutations in an uncharacterized gene on chromosome 2q33–q35 (which is termed PNKD) are responsible for PNKD. Here, we report the generation of antibodies specific for the PNKD protein and show that it is widely expressed in the mouse brain, exclusively in neurons. One PNKD isoform is a membrane-associated protein. Transgenic mice carrying mutations in the mouse Pnkd locus equivalent to those found in patients with PNKD recapitulated the human PNKD phenotype. Staining for c-fos demonstrated that administration of alcohol or caffeine induced neuronal activity in the basal ganglia in these mice. They also showed nigrostriatal neurotransmission deficits that were manifested by reduced extracellular dopamine levels in the striatum and a proportional increase of dopamine release in response to caffeine and ethanol treatment. These findings support the hypothesis that the PNKD protein functions to modulate striatal neuro­transmitter release in response to stress and other precipitating factors. 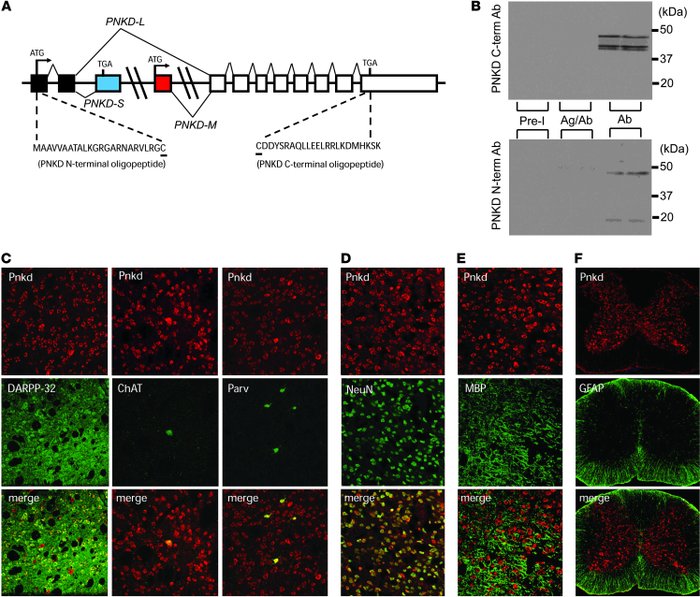