Iron overload is the hallmark of hereditary hemochromatosis and a complication of iron-loading anemias such as β-thalassemia. Treatment can be burdensome and have significant side effects, and new therapeutic options are needed. Iron overload in hereditary hemochromatosis and β-thalassemia intermedia is caused by hepcidin deficiency. Although transgenic hepcidin replacement in mouse models of these diseases prevents iron overload or decreases its potential toxicity, natural hepcidin is prohibitively expensive for human application and has unfavorable pharmacologic properties. Here, we report the rational design of hepcidin agonists based on the mutagenesis of hepcidin and the hepcidin-binding region of ferroportin and computer modeling of their docking. We identified specific hydrophobic/aromatic residues required for hepcidin-ferroportin binding and obtained evidence in vitro that a thiol-disulfide interaction between ferroportin C326 and the hepcidin disulfide cage may stabilize binding. Guided by this model, we showed that 7–9 N-terminal amino acids of hepcidin, including a single thiol cysteine, comprised the minimal structure that retained hepcidin activity, as shown by the induction of ferroportin degradation in reporter cells. Further modifications to increase resistance to proteolysis and oral bioavailability yielded minihepcidins that, after parenteral or oral administration to mice, lowered serum iron levels comparably to those after parenteral native hepcidin. Moreover, liver iron concentrations were lower in mice chronically treated with minihepcidins than those in mice treated with solvent alone. Minihepcidins may be useful for the treatment of iron overload disorders.

Defining the hepcidin-binding loop on ferroportin. 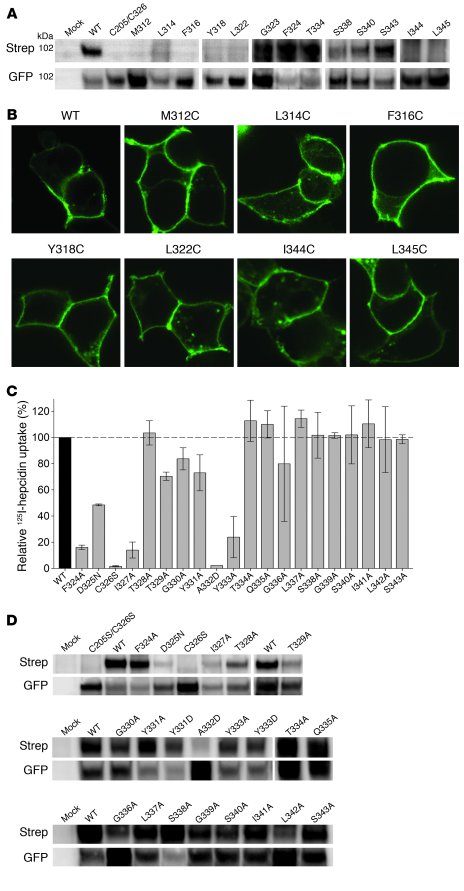 () To detect the boundaries of the C326-containing extracellular loop, certain residues between M312 and L345 on the human Fpn-GFP C205S/C326S mutant were substituted with cysteine. Mutant constructs were transfected into HEK293T cells, and cell-surface biotinylation was performed using a nonpermeable, SH-reactive biotin-maleimide. Protein lysates were immunoprecipitated with anti-GFP antibody, analyzed by SDS-PAGE, blotted, and probed with streptavidin-peroxidase to determine which mutated residues had extracellular localization. The bottom row indicates the amount of Fpn-GFP that was immunoprecipitated. Each mutant was tested in at least 3 separate experiments. () Confocal microscopy of HEK293 cells transfected with cysteine substitution mutants. Mutant proteins M312C, L314C, F316C, Y318C, L322C, I344, and L345 were all displayed on the cell surface similar to WT ferroportin-GFP, indicating that mistrafficking was not the reason for the absence of cell-surface biotinylation in . Original magnification, ×63. () To define the contribution of residues in the C326 extracellular loop to hepcidin binding, alanine-scanning mutagenesis and other substitutions were performed as indicated. After transfection of HEK293T cells, cellular uptake of 125I-hepcidin was determined and normalized to the Fpn-GFP levels in each sample, determined by Western blotting. Each bar represents the average of 3 to 4 separate experiments, and error bars indicate standard deviation. () Cell-surface biotinylation of constructs from . Of the mutants that showed decreased hepcidin uptake, only F324A and Y333A mutants had thiol-specific biotinylation similar to that of WT Fpn-GFP, whereas others (D325N, I327A, A332D) had decreased cell-surface thiol-biotinylation, suggesting that these mutants may be mistrafficked or that a conformational change may be blocking the C326-SH accessibility.