Angiotensin II (Ang II) has been shown to stimulate either hypertrophy or hyperplasia. We postulated that the differential response of vascular smooth muscle cells (VSMCs) to Ang II is mediated by the cyclin-dependent kinase (Cdk) inhibitor p27Kip1, which is abundant in quiescent cells and drops after serum stimulation. Ang II treatment (100 nM) of quiescent VSMCs led to upregulation of the cell-cycle regulatory proteins cyclin D1, Cdk2, proliferating cell nuclear antigen, and Cdk1. p27Kip1 levels, however, remained high, and the activation of the G1-phase Cdk2 was inhibited as the cells underwent hypertrophy. Overexpression of p27Kip1 cDNA inhibited serum-stimulated [3H]thymidine incorporation compared with control-transfected cells. This cell-cycle inhibition was associated with cellular hypertrophy, as reflected by an increase in the [3H]leucine/[3H]thymidine incorporation ratio and by an increase in forward-angle light scatter during flow cytometry at 48 hours after transfection. The role of p27Kip1 in modulating the hypertrophic response of VSMCs to Ang II was further tested by antisense oligodeoxynucleotide (ODN) inhibition of p27Kip1 expression. Ang II stimulated an increase in [3H]thymidine incorporation and the percentage of S-phase cells in antisense ODN–transfected cells but not in control ODN–transfected cells. We conclude that p27Kip1 plays a role in mediating VSMC hypertrophy. Ang II stimulation of quiescent cells in which p27Kip1 levels are high results in hypertrophy but promotes hyperplasia when levels of p27Kip1 are low, as in the presence of other growth factors. 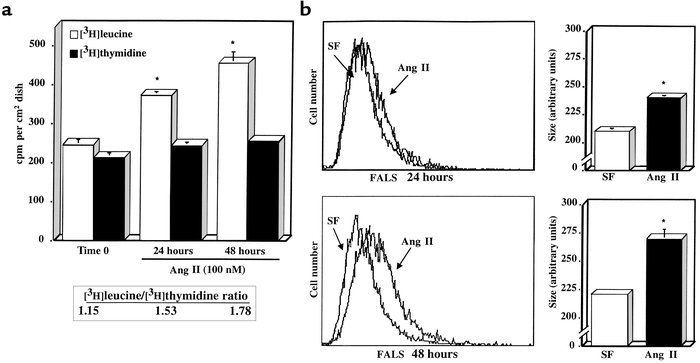 Ang II induces hypertrophy in VSMCs. Confluent, quiescent VSMCs (time 0) were incubated with Ang II (100 nM) for 24 and 48 hours. () The cells were incubated with [3H]thymidine or [3H]leucine for 2 hours, and radioactive incorporation was counted ( = 4; * < 0.001). The table demonstrates the increase of protein/DNA ratio, an indicator of cellular hypertrophy. () Relative cell size was also determined by FALS during flow cytometry ( = 3; * < 0.001). The histogram depicts FALS of representative samples comparing VSMCs held serum-free (SF) or incubated with Ang II for 24 or 48 hours.