The immune and coagulation systems are both implicated in the pathogenesis of rheumatoid arthritis (RA). Plasma carboxypeptidase B (CPB), which is activated by the thrombin/thrombomodulin complex, plays a procoagulant role during fibrin clot formation. However, an antiinflammatory role for CPB is suggested by the recent observation that CPB can cleave proinflammatory mediators, such as C5a, bradykinin, and osteopontin. Here, we show that CPB plays a central role in downregulating C5a-mediated inflammatory responses in autoimmune arthritis. CPB deficiency exacerbated inflammatory arthritis in a mouse model of RA, and cleavage of C5a by CPB suppressed the ability of C5a to recruit immune cells in vivo. In human patients with RA, genotyping of nonsynonymous SNPs in the CPB-encoding gene revealed that the allele encoding a CPB variant with longer half-life was associated with a lower risk of developing radiographically severe RA. Functionally, this CPB variant was more effective at abrogating the proinflammatory properties of C5a. Additionally, expression of both CPB and C5a in synovial fluid was higher in patients with RA than in those with osteoarthritis. These findings suggest that CPB plays a critical role in dampening local, C5a-mediated inflammation and represents a molecular link between inflammation and coagulation in autoimmune arthritis. 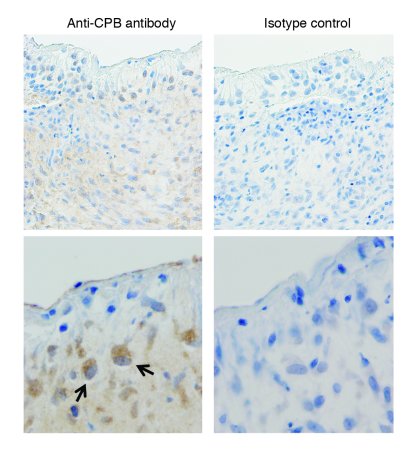 Sections of paraffin-embedded RA synovium were stained with a rabbit polyclonal anti-CPB antibody. Brown color indicates positive staining. Rabbit IgG was used as a negative isotype control. CPB was predominantly detected in an interstitial distribution, but there were also cells that exhibited a cytoplasmic staining pattern (arrows) suggestive of local production of CPB in RA synovium. Original magnification, ×200 (top), ×1,000 (bottom).