MicroRNA-21 (miR-21) is thought to be an oncomir because it promotes cancer cell proliferation, migration, and survival. miR-21 is also expressed in normal cells, but its physiological role is poorly understood. Recently, it has been found that miR-21 expression is rapidly induced in rodent hepatocytes during liver regeneration after two-thirds partial hepatectomy (2/3 PH). Here, we investigated the function of miR-21 in regenerating mouse hepatocytes by inhibiting it with an antisense oligonucleotide. To maintain normal hepatocyte viability and function, we antagonized the miR-21 surge induced by 2/3 PH while preserving baseline expression. We found that knockdown of miR-21 impaired progression of hepatocytes into S phase of the cell cycle, mainly through a decrease in levels of cyclin D1 protein, but not Ccnd1 mRNA. Mechanistically, we discovered that increased miR-21 expression facilitated cyclin D1 translation in the early phase of liver regeneration by relieving Akt1/mTOR complex 1 signaling (and thus eIF-4F–mediated translation initiation) from suppression by Rhob. Our findings reveal that miR-21 enables rapid hepatocyte proliferation during liver regeneration by accelerating cyclin D1 translation. 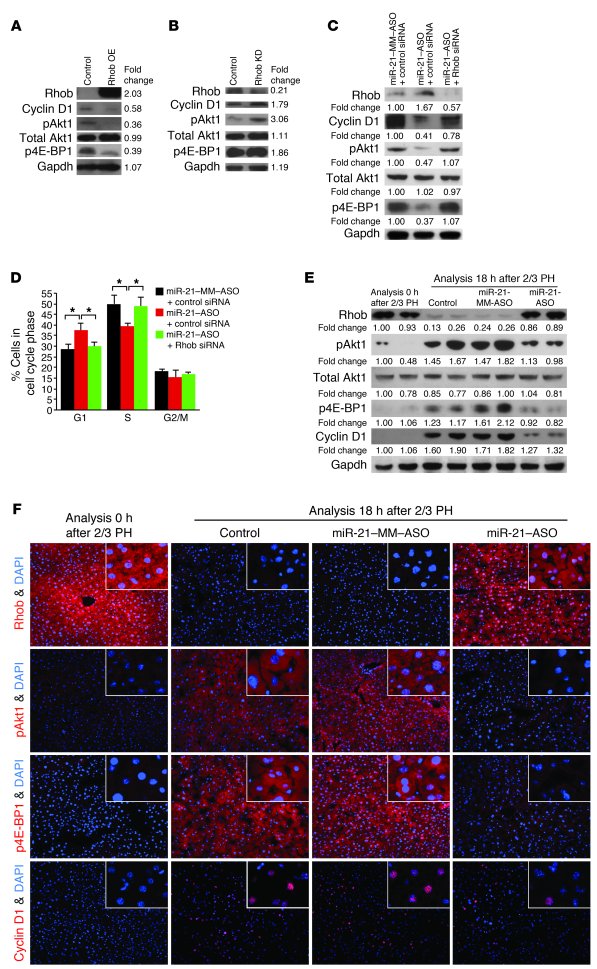