Chronic myelogenous leukemia (CML) results from a chromosomal translocation in hematopoietic stem or early progenitor cells that gives rise to the oncogenic BCR/ABL fusion protein. Clinically, CML has a chronic phase that eventually evolves into an accelerated stage and blast crisis. A CML-specific immune response is thought to contribute to the control of disease. Whether the immune system can also promote disease progression is not known. In the present study, we investigated the possibility that the TNF receptor family member CD27 is present on leukemia stem cells (LSCs) and mediates effects of the immune system on CML. In a mouse model of CML, BCR/ABL+ LSCs and leukemia progenitor cells were found to express CD27. Binding of CD27 by its ligand, CD70, increased expression of Wnt target genes in LSCs by enhancing nuclear localization of active β-catenin and TRAF2- and NCK-interacting kinase (TNIK). This resulted in increased proliferation and differentiation of LSCs. Blocking CD27 signaling in LSCs delayed disease progression and prolonged survival. Furthermore, CD27 was expressed on CML stem/progenitor cells in the bone marrow of CML patients, and CD27 signaling promoted growth of BCR/ABL+ human leukemia cells by activating the Wnt pathway. Since expression of CD70 is limited to activated lymphocytes and dendritic cells, our results reveal a mechanism by which adaptive immunity contributes to leukemia progression. In addition, targeting CD27 on LSCs may represent an attractive therapeutic approach to blocking the Wnt/β-catenin pathway in CML. 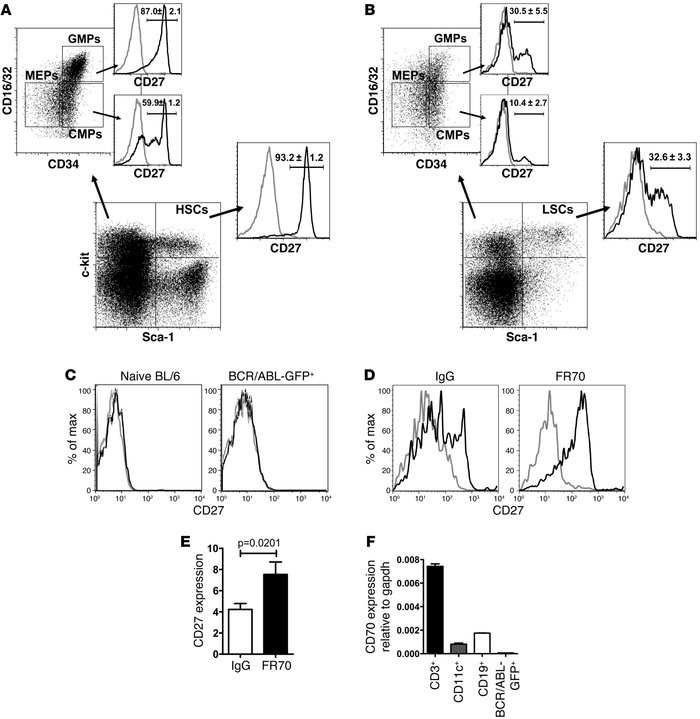