Transcription intermediary factor 1γ (TIF1γ) was suggested to play a role in erythropoiesis. However, how TIF1γ regulates the development of different blood cell lineages and whether TIF1γ is involved in human hematological malignancies remain to be determined. Here we have shown that TIF1γ was a tumor suppressor in mouse and human chronic myelomonocytic leukemia (CMML). Loss of Tif1g in mouse HSCs favored the expansion of the granulo-monocytic progenitor compartment. Furthermore, Tif1g deletion induced the age-dependent appearance of a cell-autonomous myeloproliferative disorder in mice that recapitulated essential characteristics of human CMML. TIF1γ was almost undetectable in leukemic cells of 35% of CMML patients. This downregulation was related to the hypermethylation of CpG sequences and specific histone modifications in the gene promoter. A demethylating agent restored the normal epigenetic status of the TIF1G promoter in human cells, which correlated with a reestablishment of TIF1γ expression. Together, these results demonstrate that TIF1G is an epigenetically regulated tumor suppressor gene in hematopoietic cells and suggest that changes in TIF1γ expression may be a biomarker of response to demethylating agents in CMML.

TIF1γ is downregulated in 35% of CMML patients. 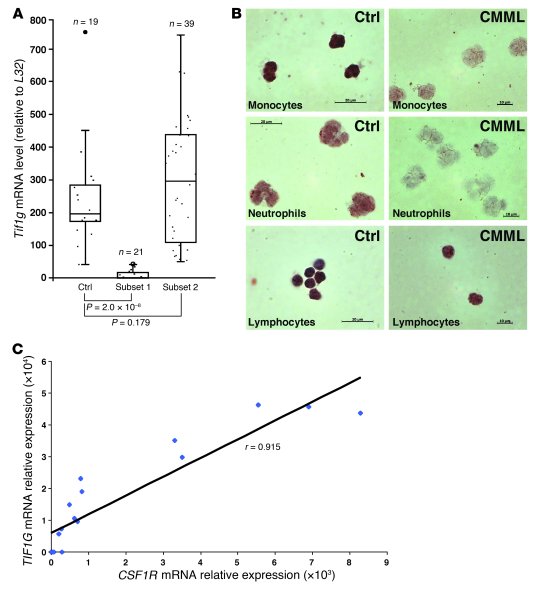 () RQ-PCR analysis of TIF1γ expression in the purified monocytes (CD14+ cells) of healthy donors (Ctrl) or CMML patients (subsets 1 and 2). () Immunocytochemistry staining for TIF1γ from the monocytes, neutrophils and lymphocytes (×340) of a representative control or CMML patient. () Correlation of and expression in monocytes of 17 individuals with CMML. The scatter plot shows and mRNA expression. Expression values are expressed in arbitrary units. A linear regression curve and the correlation coefficient are indicated. * < 0.05.