Huntington disease is an autosomal dominant neurodegenerative disorder caused by a toxic expansion in the CAG repeat region of the huntingtin gene. Oligonucleotide approaches based on RNAi and antisense oligonucleotides provide promising new therapeutic strategies for direct intervention through reduced production of the causative mutant protein. Allele-specific and simultaneous mutant and wild-type allele–lowering strategies are being pursued with local delivery to the brain, each with relative merits. Delivery remains a key challenge for translational success, especially with chronic therapy. The potential of disease-modifying oligonucleotide approaches for Huntington disease will be revealed as they progress into clinical trials. 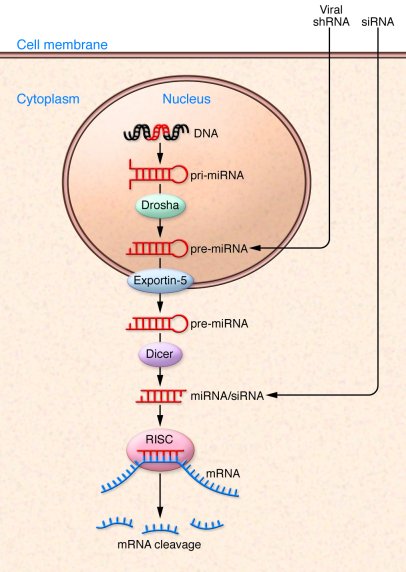 With successful delivery, siRNAs enter the cell and gain access to the cytoplasmic compartment, where they are incorporated into RNAi silencing complex (RISC). The RISC complex with the active guide strand (in red) binds the complementary sequence within the target mRNA, resulting in Argonaut 2–mediated cleavage and subsequent mRNA degradation. Endogenous miRNAs are derived from miRNA genes that are transcribed to primary miRNAs (pri-mRNA) that are cleaved by Drosha to hairpin precursors (pre-miRNAs) within the nucleus. Viral delivery of shRNAs requires entry into the nucleus, where promoter-directed expression of pre-miRNA occurs. These pre-miRNAs are exported to the cytoplasm by Exportin-5, and then the hairpin precursor is cleaved by Dicer to form miRNAs that are incorporated into RISC, leading to mRNA binding and cleavage.