Plasmacytoid DCs (pDCs) are innate immune cells that are specialized to produce IFN-α and to activate adaptive immune responses. Although IFN-α inhibits HIV-1 replication in vitro, the production of IFN-α by HIV-activated pDCs in vivo may contribute more to HIV pathogenesis than to protection. We have now shown that HIV-stimulated human pDCs allow for persistent IFN-α production upon repeated stimulation, express low levels of maturation molecules, and stimulate weak T cell responses. Persistent IFN-α production by HIV-stimulated pDCs correlated with increased levels of IRF7 and was dependent upon the autocrine IFN-α/β receptor feedback loop. Because it has been shown that early endosomal trafficking of TLR9 agonists causes strong activation of the IFN-α pathway but weak activation of the NF-κB pathway, we sought to investigate whether early endosomal trafficking of HIV, a TLR7 agonist, leads to the IFN-α–producing phenotype we observed. We demonstrated that HIV preferentially traffics to the early endosome in human pDCs and therefore skews pDCs toward a partially matured, persistently IFN-α–secreting phenotype.

HIV-activated pDCs are not refractory to restimulation to produce IFN-α. 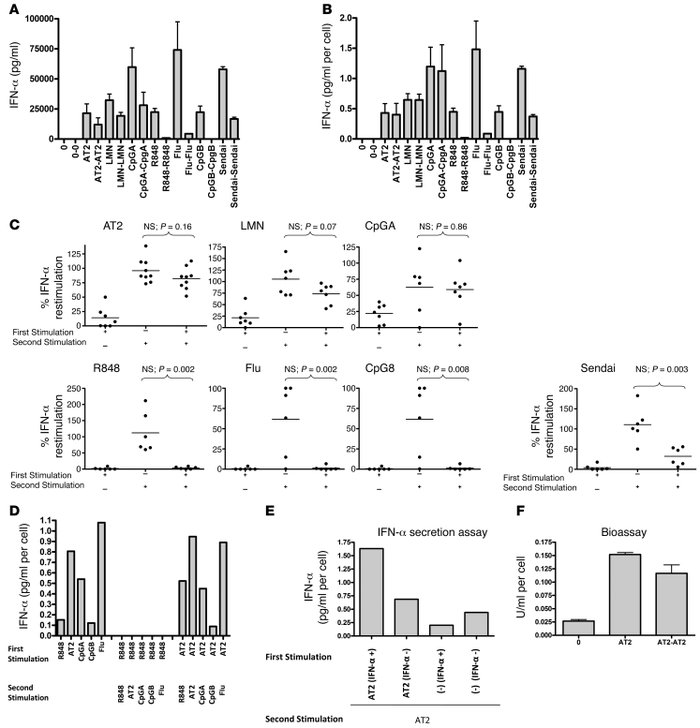 ( and ) pDCs were incubated with media alone (0), AT-2 HIV (AT2), live HIV (LMN), R848, influenza virus (Flu), Sendai virus, CpGA, or CpGB for 18 hours. Supernatants were removed, and cells were washed, counted, and restimulated for 18 hours (restimulation denoted as 0-0, AT2-AT2, LMN-LMN, etc.). IFN-α was () measured in the supernatants by ELISA and () corrected for cell number. () Experiments were repeated for 6–10 donors. Percent IFN-α restimulation denotes IFN-α produced after the second stimulation relative to that after the first. Dots represent mean of 2 replicates per donor. () HIV-stimulated pDCs could be restimulated with different TLR ligands, whereas R848-stimulated pDCs could not be restimulated. Data are means ( = 2 replicates) and representative of 2 independent experiments. () pDCs were stimulated with media or AT-2 HIV for 12 hours; sorted; separated into IFN-α–secreting and non–IFN-α–secreting cells; and then stimulated with AT-2 HIV for 24 hours. AT-2 HIV–activated IFN-α–secreting pDCs produced more cytokine per cell than did HIV-activated pDCs that did not produce IFN-α upon initial stimulation. Data are means ( = 2 replicates) and representative of 2 independent experiments. () Culture supernatants were applied to a COS1 pRLpISRE cell line that produces luciferase upon exposure to bioactive type I IFNs. pDCs produced bioactive type I IFN upon repeated stimulation with HIV. Data are mean ± SEM ( = 2 replicates) and representative of 3 independent experiments.