During intrauterine life, the mammalian embryo survives via its physical connection to the mother. The uterine decidua, which differentiates from stromal cells after implantation in a process known as decidualization, plays essential roles in supporting embryonic growth before establishment of the placenta. Here we show that female mice lacking death effector domain–containing protein (DEDD) are infertile owing to unsuccessful decidualization. In uteri of Dedd–/– mice, development of the decidual zone and the surrounding edema after embryonic implantation was defective. This was subsequently accompanied by disintegration of implantation site structure, leading to embryonic death before placentation. Polyploidization, a hallmark of mature decidual cells, was attenuated in DEDD-deficient cells during decidualization. Such inefficient decidualization appeared to be caused by decreased Akt levels, since polyploidization was restored in DEDD-deficient decidual cells by overexpression of Akt. In addition, we showed that DEDD associates with and stabilizes cyclin D3, an important element in polyploidization, and that overexpression of cyclin D3 in DEDD-deficient cells improved polyploidization. These results indicate that DEDD is indispensable for the establishment of an adequate uterine environment to support early pregnancy in mice. 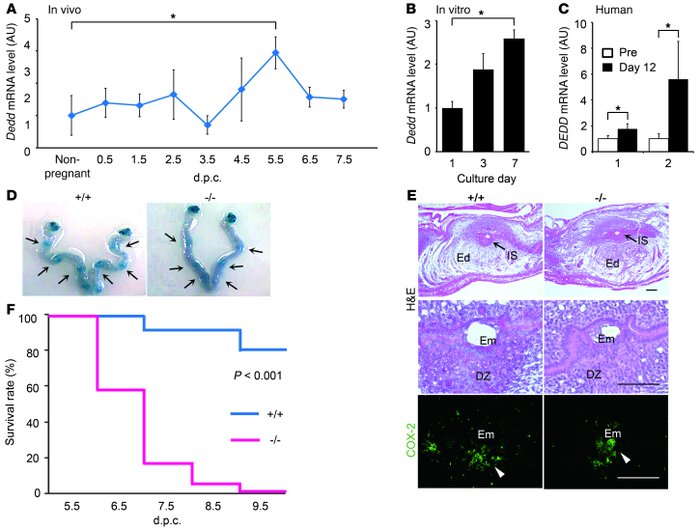 (–) Increase in mRNA level in response to implantation in wild-type mouse () or in vitro decidualization in mouse uterine stromal () and human endometrial () cells, assessed by QPCR. Values were normalized to those of β or and are presented as relative expression to those of nonpregnant (), day 1 (), or undifferentiated () controls. Pre, undifferentiated cells; Day 12, decidualized cells at 12 days after the differentiation induction. In , results from triplicate experiments using specimens from two individuals (1 and 2) are shown. Error bars indicate SEM. () Embryo spacing and crowding were assessed by blue dye injection. Representative photos of the uteri are shown. () Histologic analysis of implantation sites at 4.5 dpc in (+/+) and (–/–) uteri. Sections were stained with H&E or immunostained for COX-2. Em, embryo; DZ, decidual zone; Ed, edematous region (outside of DZ, white zone). Positive signals for COX-2 are indicated by arrowheads. Scale bars: 200 μm. () Survival rates of embryos during early gestation (Kaplan-Meier method). When embryo bodies were observed, regardless of size, they were regarded as “alive,” whereas degenerated masses or those with scars at implantation sites were regarded as “dead.” = 75 for and = 44 for uteri; log-rank, χ2 = 13.2. * 0.05.