Loss of Gata5 in mice leads to bicuspid aortic valve

Loss of Gata5 in mice leads to bicuspid aortic valve

Bicuspid aortic valve (BAV), the leading congenital heart disease, occurs in 1%–2% of the population. Genetic studies suggest that BAV is an autosomal-dominant disease with reduced penetrance. However, only 1 gene, NOTCH1, has been linked to cases of BAV. Here, we show that targeted deletion of Gata5 in mice leads to hypoplastic hearts and partially penetrant BAV formation. Endocardial cell–specific inactivation of Gata5 led to BAV, similar to that observed in Gata5–/– mice. In all cases, the observed BAVs resulted from fusion of the right-coronary and noncoronary leaflets, the subtype associated with the more severe valve dysfunction in humans. Neither endocardial cell proliferation nor cushion formation was altered in the absence of Gata5. Rather, defective endocardial cell differentiation, resulting from the deregulation of several components of the Notch pathway and other important endocardial cell regulators, may be the underlying mechanism of disease. The results unravel a critical cell-autonomous role for endocardial Gata5 in aortic valve formation and identify GATA5 as a potential gene responsible for congenital heart disease in humans. Mice with mutated Gata5 alleles represent unique models to dissect the mechanisms underlying degenerative aortic valve disease and to develop much-needed preventive and therapeutic interventions. 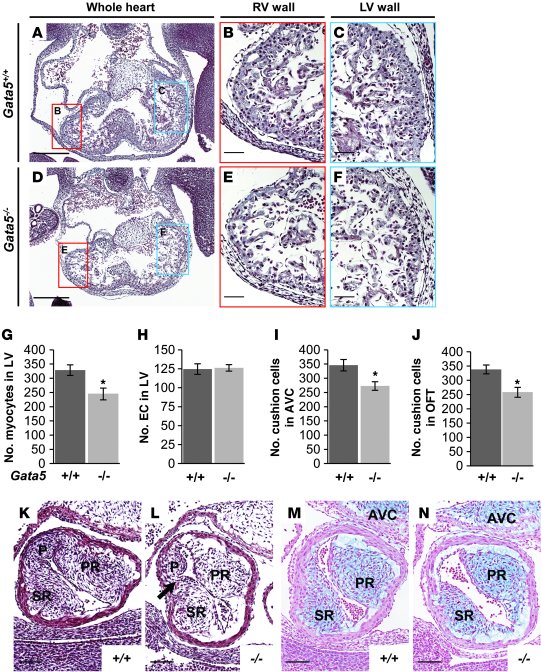 (–) Trichrome staining of heart transverse sections at E11.5. embryos had thinner LV and RV and were less trabeculated than were controls. Boxed regions in and are shown at higher magnification in , , , and , as indicated. (–) Number of cells in and littermate embryos at E11.5 ( = 3–5 per group). The number of myocytes within the LV was reduced in mice compared with controls (), whereas the number of ECs remained unchanged (). The number of mesenchymal cells in the AVC and OFT of embryos was also significantly decreased by 20% ( and ). ( and ) Trichrome staining of transverse sections of OFT at E11.5. Arrow denotes abnormal fusion of the posterior intercalated cushion with the septal ridge, creating a R-N BAV. SR, septal ridge; P, posterior intercalated cushion; PR, parietal ridge. ( and ) Alcian blue staining was used to visualize acid glycosaminoglycans, such as hyularonic acid, within the endocardial cushions of the OFT. embryos had a similar amount of alcian blue staining in the OFT endocardial cushions at E11.5. Scale bars: 300 μm ( and ); 50 μm (, , , and ); 75 μm (–). * < 0.05 vs. .