The transcription factor p53 is a tumor suppressor. As such, the P53 gene is frequently altered in human cancers. However, over 80% of the P53 mutations found in human cancers are missense mutations that lead to expression of mutant proteins that not only lack p53 transcriptional activity but exhibit new functions as well. Recent studies show that restoration of p53 expression leads to tumor regression in mice carrying p53 deletions. However, the therapeutic efficacy of restoring p53 expression in tumors containing p53 missense mutations has not been evaluated. Here we demonstrate that restoring wild-type p53 expression halted tumor growth in mice inheriting a p53R172H missense mutation that is equivalent to a P53 missense mutation detected in approximately 6% of human cancers. However, it did not lead to tumor regression, as was observed in mice lacking p53. We further showed that the dominant-negative effect of the mutant p53 encoded by p53R172H dampened the activity of the restored wild-type p53. We therefore conclude that in a mutant p53 background, p53 restoration has the therapeutic potential to suppress tumor progression. Our findings support using p53 restoration as a strategy to treat human cancers with P53 missense mutations and provide direction for optimizing p53 restoration in cancer therapy.

Generation of a latent allele. 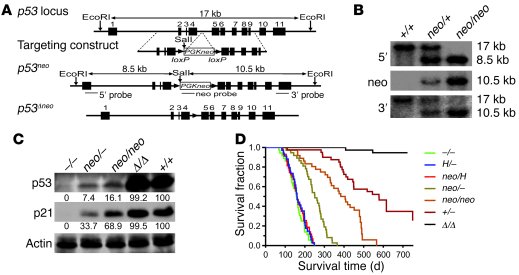