Basophils are the least abundant granulocytes found in the circulation. Until recently, their functions were poorly understood. In the past few years, the list of basophil functions in the context of immunity has dramatically increased. Thus, the need for basophil-deficient animal models to confirm these findings is imperative. In this issue of the JCI, Wada and colleagues introduce the first mouse model in which basophils are conditionally ablated in vivo. Using this model, they then uncover a nonredundant role for basophils in acquired immunity against tick infection. 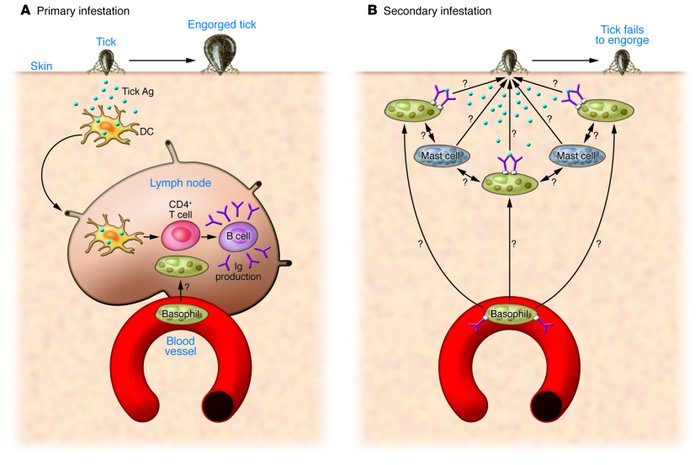 The model depicted here for the role of basophils during primary and secondary tick infestation as suggested by the data of Wada and colleagues (). () Primary infestation. Upon infestation, tick antigens are likely to be taken up by tissue-resident dendritic cells, which subsequently migrate to the draining lymph nodes, where they present the antigen to CD4+ T cells. Activated CD4+ T cells are expected to provide “help” to B cells to produce tick antigen–specific Igs (including IgE and IgG). Whether basophils enter into the draining lymph nodes and influence the T cell responses as previously seen in the infection model remains unclear. Tick engorgement takes place. () Secondary infestation. Upon secondary infestation, basophils are rapidly recruited to the infestation sites, where they are expected to be activated by surface antibody crosslinking. How basophil recruitment is induced is unknown. Tissue mast cells play an important role in providing resistance, although antibody-mediated activation of mast cells is dispensable for the resistance. Antibody-activated basophils may cooperate with mast cells during this process. Tick engorgement fails to occur. The effector mechanisms that directly inhibit tick engorgement remain to be examined.