Tim-3 expression on PD-1+ HCV-specific human CTLs is associated with viral persistence, and its blockade restores hepatocyte-directed in vitro cytotoxicity

Tim-3 expression on PD-1+ HCV-specific human CTLs is associated with viral persistence, and its blockade restores hepatocyte-directed in vitro cytotoxicity

Having successfully developed mechanisms to evade immune clearance, hepatitis C virus (HCV) establishes persistent infection in approximately 75%–80% of patients. In these individuals, the function of HCV-specific CD8+ T cells is impaired by ligation of inhibitory receptors, the repertoire of which has expanded considerably in the past few years. We hypothesized that the coexpression of the negative regulatory receptors T cell immunoglobulin and mucin domain–containing molecule 3 (Tim-3) and programmed death 1 (PD-1) in HCV infection would identify patients at risk of developing viral persistence during and after acute HCV infection. The frequency of PD-1–Tim-3– HCV-specific CTLs greatly outnumbered PD-1+Tim-3+ CTLs in patients with acute resolving infection. Moreover, the population of PD-1+Tim-3+ T cells was enriched for within the central memory T cell subset and within the liver. Blockade of either PD-1 or Tim-3 enhanced in vitro proliferation of HCV-specific CTLs to a similar extent, whereas cytotoxicity against a hepatocyte cell line that expressed cognate HCV epitopes was increased exclusively by Tim-3 blockade. These results indicate that the coexpression of these inhibitory molecules tracks with defective T cell responses and that anatomical differences might account for lack of immune control of persistent pathogens, which suggests their manipulation may represent a rational target for novel immunotherapeutic approaches. 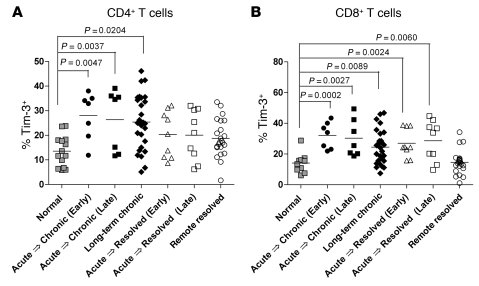