Enhanced ROCK2 activation in the absence of Def6. 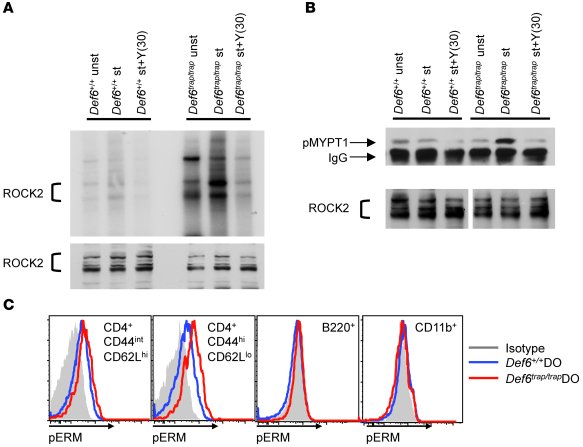 ( and ) Purified CD4+ T cells from or mice were either left unstimulated (unst) or restimulated (st) with anti-CD3 and anti-CD28 mAbs for 48 hours in the presence or absence of 30 μM Y27632 [Y()]. () ROCK2 kinase activity was measured by in vitro kinase assay using [γ-32P]ATP. Autophosphorylated ROCK2 was detected by autoradiography. () ROCK2 kinase activity was assayed by incubating immunoprecipitated ROCK2 with purified rMYPT1 as ROCK2 substrate, and pMYPT1 was detected by Western blot analysis using anti-pMYPT1 Ab. In and , total ROCK2 levels in the input samples are shown below. In , lanes were run on the same gel but were noncontiguous (white line). () Levels of pERM in CD4+CD44intCD62Lhi, CD4+CD44hiCD62Llo, B220+, and CD11b+ cells from DO11.10 or DO11.10 mice were detected by intracellular staining with anti-pERM Ab and analyzed by FACS. Solid histograms indicate isotype control. Shown are overlaid histograms after gating on the appropriate populations. (–) Data are representative of 3 independent experiments.