Ticks are ectoparasitic arthropods that can transmit a variety of microorganisms to humans and animals during blood feeding, causing serious infectious disorders, including Lyme disease. Acaricides are pharmacologic agents that kill ticks. The emergence of acaricide-resistant ticks calls for alternative control strategies for ticks and tick-borne diseases. Many animals develop resistance to ticks after repeated infestations, but the nature of this acquired anti-tick immunity remains poorly understood. Here we investigated the cellular and molecular mechanisms underlying acquired resistance to Haemaphysalis longicornis ticks in mice and found that antibodies were required, as was IgFc receptor expression on basophils but not on mast cells. The infiltration of basophils at tick-feeding sites occurred during the second, but not the first, tick infestation. To assess the requirement for basophil infiltration to acquired tick resistance, mice expressing the human diphtheria toxin receptor under the control of the mast cell protease 8 (Mcpt8) promoter were generated. Diphtheria toxin administration to these mice selectively ablated basophils. Diphtheria toxin–mediated basophil depletion before the second tick infestation resulted in loss of acquired tick resistance. These data provide the first clear evidence, to our knowledge, that basophils play an essential and nonredundant role in antibody-mediated acquired immunity against ticks, which may suggest new strategies for controlling tick-borne diseases.

IgFc receptors on mast cells are dispensable for antibody-mediated, protective immunity against ticks. 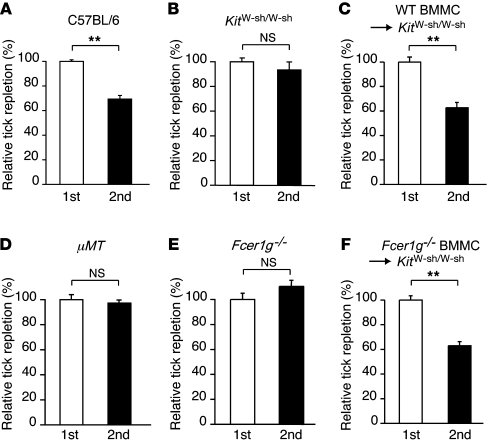