Sterol profiles of patient samples and mutation analysis of in proband and parental samples. 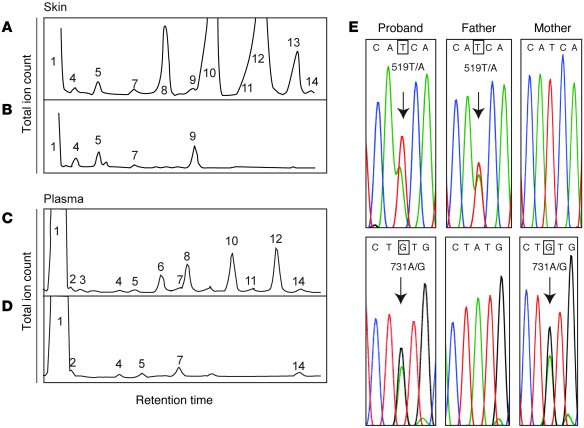 GC-MS total ion current profiles of sterol extracts of patient skin (), control skin (), patient plasma (), and control plasma (). The ordinates are detector response, and the abscissas are elution time. The numbered compounds are: 1, cholesterol; 2, cholestanol; 3, 8()-cholestenol; 4, desmosterol plus 7-dehydrocholesterol; 5, lathosterol; 6, unidentified monomethylsterol; 7, campesterol; 8, 4α-methyl-5α–cholest-8()-en-3β-ol; 9, dihydrolanosterol; 10, 4α-methyl-5a-cholest-7()-en-3β-ol; 11, unidentified isomer of 4,4′-dimethyl-5α-cholesta-8()-en-3β-ol; 12, 4,4′-dimethyl-5α-cholesta-8()-en-3β-ol; 13, 4,4′-dimethyl-5α-cholesta-8(),24-dien-3β-ol, 14, sitosterol. The ion fragment patterns of each methyl sterol peak are shown in the Supplemental Note. Note that the column run for plasma elution time is slightly shifted compared with that of the skin samples. The levels of dimethylsterols and monomethylsterols were markedly increased in patient skin. Dimethylsterol (peak 6) is most elevated in skin, suggesting the preferential accumulation of 4,4′-dimethylsterols in the patient’s skin. The absence of a 4-carboxysterol in the skin excludes a possible defect in . () Two mutations were identified in from both gDNA and cDNA extracted from peripheral blood leukocytes: 519T→A (top) and 731A→G (bottom). 519T→A was also identified in gDNA from the patient’s father, and 731A→G was identified in the mother.