Gait disorders and postural instability, which are commonly observed in elderly patients with Parkinson disease (PD), respond poorly to dopaminergic agents used to treat other parkinsonian symptoms. The brain structures underlying gait disorders and falls in PD and aging remain to be characterized. Using functional MRI in healthy human subjects, we have shown here that activity of the mesencephalic locomotor region (MLR), which is composed of the pedunculopontine nucleus (PPN) and the adjacent cuneiform nucleus, was modulated by the speed of imagined gait, with faster imagined gait activating a discrete cluster within the MLR. Furthermore, the presence of gait disorders in patients with PD and in aged monkeys rendered parkinsonian by MPTP intoxication correlated with loss of PPN cholinergic neurons. Bilateral lesioning of the cholinergic part of the PPN induced gait and postural deficits in nondopaminergic lesioned monkeys. Our data therefore reveal that the cholinergic neurons of the PPN play a central role in controlling gait and posture and represent a possible target for pharmacological treatment of gait disorders in PD.

Comparison of MPTP-induced gait and postural disorders with those induced by bilateral cholinergic lesion. 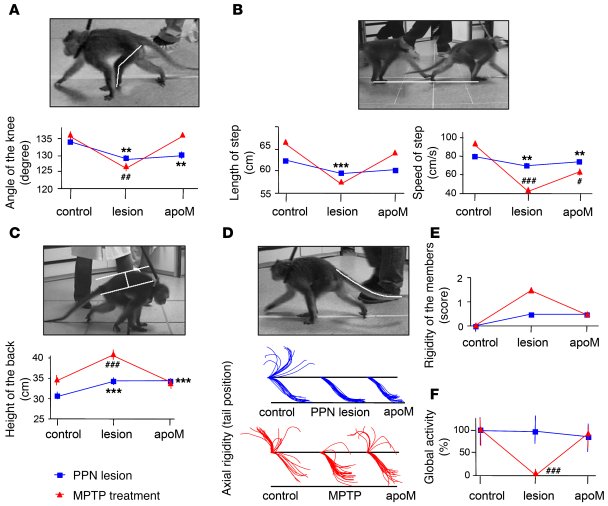 Gait and postural parameters were evaluated in macaques ( = 9) in 3 conditions: under control conditions, after bilateral destruction of PPN cholinergic neurons ( = 5) or MPTP intoxication ( = 4), and after apomorphine treatment (apoM). Only results obtained in animal M4, with PPN lesion, and M6, treated by MPTP, are illustrated on the graphs. Symptoms included a decrease in the angle of the knee () and in step length and speed (), an increase in the height of the back (), modification of the tail position (axial rigidity; ), and arm and leg rigidity (). The most prevalent symptom observed after MPTP intoxication was akinesia, as assessed by a dramatic and significant decrease in global activity (). All these symptoms were significantly reversed by apomorphine treatment in MPTP-treated animals, but not in animals with PPN lesion. * < 0.05, ** < 0.01, *** < 0.001, PPN lesion versus control; # < 0.05, ## < 0.01, ### < 0.001, MPTP intoxication versus control, Friedman test followed by Wilcoxon test.