The transcription factor CCAAT/enhancer-binding protein β (C/EBPβ) is enriched in liver and adipose tissue and controls the expression of a wide variety of genes coding for important metabolic pathways, including gluconeogenesis and lipid synthesis. To investigate the role of C/EBPβ on glucose homeostasis, we studied mice with a targeted deletion of the gene for C/EBPβ–/– mice. Adult C/EBPβ–/– mice have hypoglycemia after an 18-hour fast, accompanied by lower hepatic glucose production (40% of that of wild-type mice), with no change in plasma insulin and a lower concentration of plasma free fatty acids (FFA). Glucagon infusion during a pancreatic clamp acutely stimulated hepatic glucose production by 38% in wild-type animals, with no change detected in C/EBPβ–/– mice. Unexpectedly, both the basal and glucagon-stimulated hepatic cyclic adenosine monophosphate (cAMP) levels were lower in C/EBPβ–/– mice, indicating an essential role for C/EBPβ in controlling proximal signal transduction. Fasting hypoglycemia was associated with normal levels of phosphoenolpyruvate carboxykinase (PEPCK) and glucose-6-phosphatase (G6Pase) gene expression, however net liver glycogenolysis was impaired in C/EBPβ–/– mice. FFA release from isolated adipose tissue in response to epinephrine was 68% lower in C/EBPβ–/– mice than in control animals; however, N6,O2′-dibutyryladenosine (Bt2) cAMP stimulated a twofold increase in FFA release in C/EBPβ–/– compared with no further increase in wild-type mice. Because a deletion in the gene for C/EBPβ reduces blood glucose and circulating FFA, it could be an important therapeutic target for the treatment of non–insulin-dependent diabetes and possibly obesity, based on designing antagonists that decrease C/EBPβ activity. 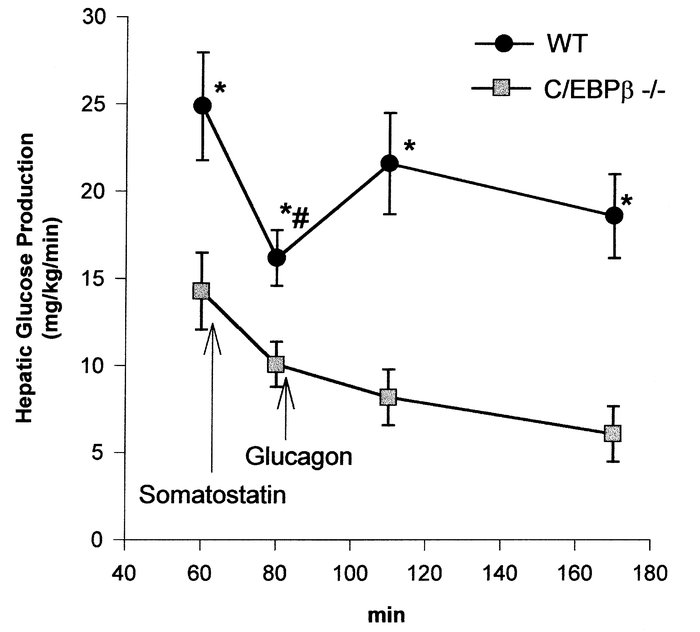 Decreased hepatic glucose production and glucagon resistance in adult mice homozygous for a deletion of the C/EBPβ gene (–/–). Previously catheterized mice were fasted 18 h before undergoing a pancreatic clamp as described in Methods. Somatostatin (0.8 μg/kg/min) was infused at a constant rate after the basal glucose turnover determination at 60 min to suppress endogenous insulin and glucagon secretion. After blood sampling at 80 min, glucagon infusion (0.5 μg/kg/min) was initiated for the next 100 min. Hepatic glucose production was calculated under steady-state conditions (as determined previously by repeated blood sampling every 5 min) at min 60, 80, 110, and 170 by dividing the [3H]glucose infusion rate by the mean plasma glucose specific activity. *Significantly greater than C/EBPβ–/– at each time point; 0.05. #Significantly less than 60-min or 120-min time point; 0.05. Graphs represent the mean ± SEM of eight animals in each group. CCAAT/enhancer-binding protein β.