The mechanism of thyroid hormone (TH) secretion from the thyroid gland into blood is unknown. Humans and mice deficient in monocarboxylate transporter 8 (MCT8) have low serum thyroxine (T4) levels that cannot be fully explained by increased deiodination. Here, we have shown that Mct8 is localized at the basolateral membrane of thyrocytes and that the serum TH concentration is reduced in Mct8-KO mice early after being taken off a treatment that almost completely depleted the thyroid gland of TH. Thyroid glands in Mct8-KO mice contained more non-thyroglobulin-associated T4 and triiodothyronine than did those in wild-type mice, independent of deiodination. In addition, depletion of thyroidal TH content was slower during iodine deficiency. After administration of 125I, the rate of both its secretion from the thyroid gland and its appearance in the serum as trichloroacetic acid–precipitable radioactivity was greatly reduced in Mct8-KO mice. Similarly, the secretion of T4 induced by injection of thyrotropin was reduced in Mct8-KO in which endogenous TSH and T4 were suppressed by administration of triiodothyronine. To our knowledge, this study is the first to demonstrate that Mct8 is involved in the secretion of TH from the thyroid gland and contributes, in part, to the low serum T4 level observed in MCT8-deficient patients.

Diagrammatic representation of the steps involved in TH synthesis. 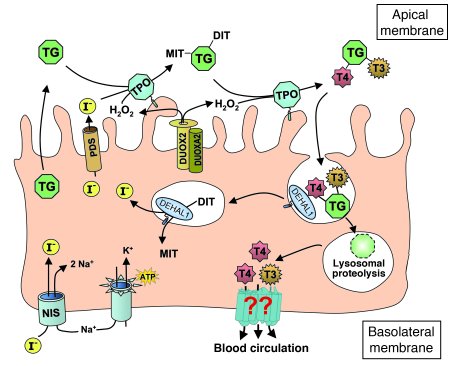 All have been characterized at the molecular level, except for that involved in TH secretion. The latter, mediated through putative transporters, is indicated by question marks.