The effect of the histone deacetylase inhibitor, SAHA, on ARv567es-expressing cells. 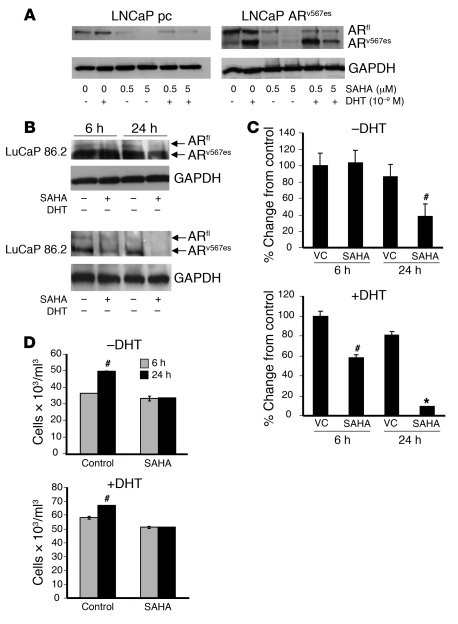 () LNCaP pc or LNCaP ARv567es cells were grown to 80 percent confluence in CS medium, with or without DHT (10–9 M). SAHA was then added at the concentrations noted, and after 16 hours, cell lysates were collected, and Western blots were run with AR sc441 primary antibody, which detects both full-length and variant AR. () Two LuCaP 86.2 xenografts were removed and digested with collagenase to single cell suspensions. Cells were then plated in RPMI 5% CS medium, with or without DHT (one xenograft was grown with DHT, another without). Six hours later, cells were treated with either vehicle control (VC) or SAHA (5 mM). Six and twenty-four hours following treatment, cells were trypsinized and counted and cell lysates were collected for Western blots (blotted with AR sc441 antibody or GAPDH as a loading control). () Density of ARv567es bands corrected for GAPDH. # < 0.05, * < 0.01, compared with vehicle control 6 or 24 hours. Values are mean ± SEM. () Cell counts corresponding to treatments in . # < 0.05, compared with 6 hour control. Values are mean ± SEM.