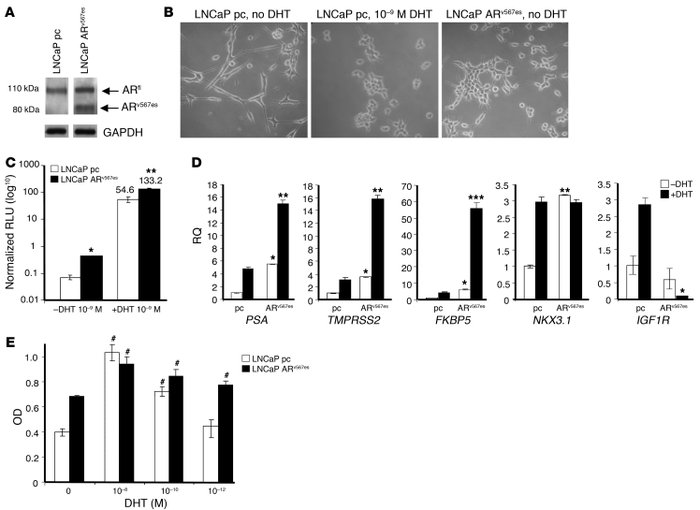 The AR-positive LNCaP cells were transfected with ARv567es or empty vector (pcDNA). () Western blot using AR sc441 antibody, which detects both ARfl and ARv567es. In cells transfected with ARv567es, the ARfl protein is markedly increased over that of control cells. Lanes were run on the same gel but were noncontiguous. () LNCaP cells were grown in vitro in CS serum. Cells containing the constituently active ARv567es had the cuboidal appearance of the androgen-treated LNCaP cells. Original magnification, ×100. () Luciferase ARR3-Luc reporter assays performed on LNCaP cells showed a significant increase in AR signaling in the absence of DHT for cells expressing the ARv567es protein. When DHT was added, there was a further increase in AR transactivation in the ARv567es cells (133.2 RLU) compared with LNCaP pc control cells (54.6 RLU). * < 0.01, ** < 0.001. () mRNA from several AR-regulated genes was examined by qt-RT-PCR (RQ). Interestingly, IGF-IR, which is regulated by nongenomic activities of the AR, was suppressed by the presence of ARv567es, suggesting a loss of nongenomic AR activity by the variant. * < 0.01, ** < 0.001, *** < 0.0001, compared with LNCaP pc cells with same treatment. () MTS assay of LNCaP pc and LNCaP ARv567es cells treated with decreasing concentrations of DHT. # < 0.05, compared with LNCaP control cells. Values are mean ± SEM.