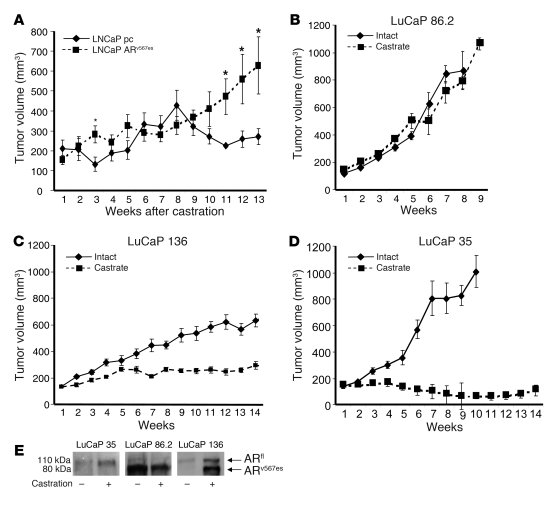 () 1 × 106 LNCaP pc or LNCaP ARv567es cells were mixed 1:1 with Matrigel and injected s.c. into athymic nude mice ( = 10 per line). When tumors reached a volume of 100–200 mm3, mice were castrated and animals were followed until tumors regrew and reached a volume of 1,000 mm3 or met IACUC criteria for euthanasia. There was no difference in growth rate in intact mice. Following castration, the LNCaP ARv567es tumors, which did not decrease in volume following castration, grew to a significantly larger volume, more quickly than those of controls. * < 0.01, LNCaP ARv567es tumor volume versus LNCaP pc tumor volume. Values are mean ± SEM. (–) The response of tumor volume to castration in 3 different xenografts (intact, = 12 per xenograft; castrate, = 12 per xenograft). Note that LuCaP 86.2, which has the majority of its AR in the ARv567es form, had no castration response; LuCaP 136, which has both full-length and variant AR, had a modest response to castration; and LuCaP 35, which has the majority of its AR as ARfl, had a marked decrease in tumor volume in response to castration. Values are mean ± SEM. () Western blots of representative xenografts before and 6 weeks after castration using AR sc441, which recognizes ARv567es and ARfl. Lanes were run on different gels.