The renin-angiotensin-aldosterone system (RAAS) is a key hormonal system regulating blood pressure. However, expression of RAAS components has recently been detected in immune cells, and the RAAS has been implicated in several mouse models of autoimmune disease. Here, we have identified Ang II as a paracrine mediator, sustaining inflammation in the CNS in the EAE mouse model of MS via TGF-β. Ang II type 1 receptors (AT1Rs) were found to be primarily expressed in CNS-resident cells during EAE. In vitro, astrocytes and microglia responded to Ang II treatment by inducing TGF-β expression via a pathway involving the TGF-β–activating protease thrombospondin-1 (TSP-1). TGF-β upregulation in astrocytes and microglia during EAE was blocked with candesartan (CA), an inhibitor of AT1R. Treatment of EAE with CA ameliorated paralysis and blunted lymphocyte infiltration into the CNS, outcomes that were also seen with genetic ablation of AT1Ra and treatment with an inhibitor of TSP-1. These data suggest that AT1R antagonists, frequently prescribed as antihypertensives, may be useful to interrupt this proinflammatory, CNS-specific pathway in individuals with MS. 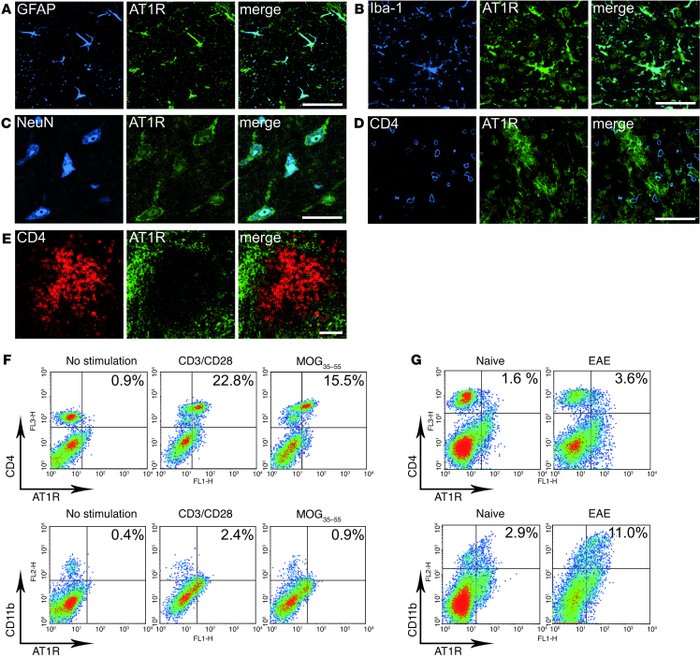 (–) Fluorescence double staining of spinal cords from diseased mice for AT1R (green) and the following specific cell markers (blue): () GFAP for astrocytes, () Iba-1 for microglia, () NeuN for neurons, and () CD4 for CD4+ T cells. AT1R is highly expressed in astrocytes, microglia, and neurons, while it is almost not detectable in CD4+ T cells by immunohistochemistry, as surrounding CNS cells supersede T cells in immunoreactivity. () Fluorescence double staining of the spleen from a diseased mouse for CD4 (red) and AT1R (green). Immunoreactivity for AT1R is not detectable in CD4+ cells. All tissues were taken from vehicle control mice on day 6 after onset of EAE. Scale bars: 50 μm. () Cell surface AT1R expression in CD4+ and CD11b+ splenocytes stimulated in vitro. Cells from naive 2D2 mice were stimulated in vitro with either MOG35–55 or anti-CD3/CD28 for 48 hours and then analyzed by FACS. Expression of AT1R increases on both cell types after antigen specific and nonspecific T cell stimulation. () Cell surface AT1R expression on CD4+ and CD11b+ cells after induction of EAE. Splenocytes were taken on day 15 after immunization and analyzed by FACS. Expression of AT1R increases in both cell types after inducing neuroinflammation. FACS data are representative for at least 2 independent experiments. ( and ) The percentages of double positively stained cells are indicated in each box.