Allogeneic blood or BM transplantation (BMT) is the most commonly applied form of adoptive cellular therapy for cancer. In this context, the ability of donor T cells to respond to recipient antigens is coopted to generate graft-versus-tumor (GVT) responses. The major reason for treatment failure is tumor recurrence, which is linked to the eventual loss of functional, host-specific CTLs. In this study, we have explored the role of recipient antigen expression by nonhematopoietic cells in the failure to sustain effective CTL immunity. Using clinically relevant models, we found that nonhematopoietic antigen severely disrupts the formation of donor CD8+ T cell memory at 2 distinct levels that operate in the early and late phases of the response. First, initial and direct encounters between donor CD8+ T cells and nonhematopoietic cells blocked the programming of memory precursors essential for establishing recall immunity. Second, surviving CD8+ T cells became functionally exhausted with heightened expression of the coinhibitory receptor programmed death-1 (PD-1). These 2 factors acted together to induce even more profound failure in long-term immunosurveillance. Crucially, the functions of exhausted CD8+ T cells could be partially restored by late in vivo blockade of the interaction between PD-1 and its ligand, PD-L1, without induction of graft-versus-host disease, suggestive of a potential clinical strategy to prevent or treat relapse following allogeneic BMT. 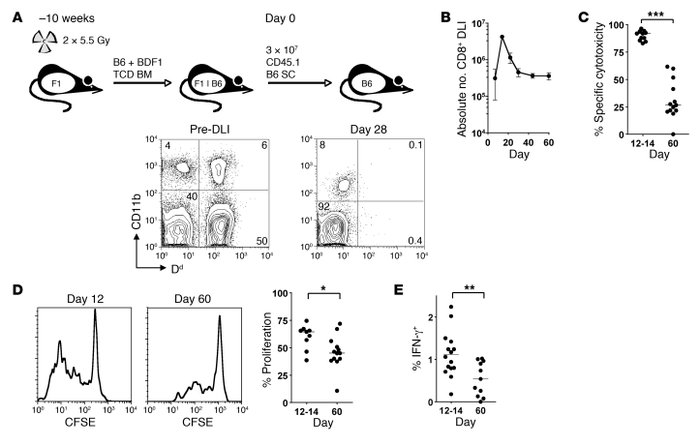 () Allogeneic chimeras were generated by lethal irradiation of recipient BDF1 (F1) mice followed by reconstitution with T cell–depleted (TCD) B6 and BDF1 BM. 10 weeks later, 3 × 107 CD45.1+ B6 SCs were transferred to established chimeras. A representative example of blood chimerism of mice before and 28 days after DLI is shown using Dd as a marker of BDF1-derived cells. () Absolute number of CD45.1+ CD8+ T cells recovered from the spleen at various times following DLI ( = 3 per group per time point). () A 1:1 mix of CFSEhi and CFSElo labeled B6 and BDF1 B cells, respectively, were injected intravenously into mice 12 or 60 days after DLI. In vivo cytotoxicity was measured by the disappearance of injected BDF1 B cells relative to B6 B cells after 15 hours. () SCs isolated from recipients at 12 or 60 days were CFSE labeled and stimulated for 5 days with irradiated BDF1 SCs. Shown are representative histograms of proliferation of transferred CD8+ T cells and summary data of the percentage of cells that had divided 2 or more times. () SCs were restimulated overnight with irradiated BDF1 SCs, and production of IFN-γ by donor CD8+ T cells was measured by intracellular cytokine staining and flow cytometry. Scatter plot indicates the percentage of CD45.1+ CD8+ T cells secreting IFN-γ. * < 0.05, ** < 0.01, *** < 0.001, Mann-Whitney test.