Narcolepsy is a sleep disorder characterized by excessive daytime sleepiness and attacks of muscle atonia triggered by strong emotions (cataplexy). Narcolepsy is caused by hypocretin (orexin) deficiency, paralleled by a dramatic loss in hypothalamic hypocretin-producing neurons. It is believed that narcolepsy is an autoimmune disorder, although definitive proof of this, such as the presence of autoantibodies, is still lacking. We engineered a transgenic mouse model to identify peptides enriched within hypocretin-producing neurons that could serve as potential autoimmune targets. Initial analysis indicated that the transcript encoding Tribbles homolog 2 (Trib2), previously identified as an autoantigen in autoimmune uveitis, was enriched in hypocretin neurons in these mice. ELISA analysis showed that sera from narcolepsy patients with cataplexy had higher Trib2-specific antibody titers compared with either normal controls or patients with idiopathic hypersomnia, multiple sclerosis, or other inflammatory neurological disorders. Trib2-specific antibody titers were highest early after narcolepsy onset, sharply decreased within 2–3 years, and then stabilized at levels substantially higher than that of controls for up to 30 years. High Trib2-specific antibody titers correlated with the severity of cataplexy. Serum of a patient showed specific immunoreactivity with over 86% of hypocretin neurons in the mouse hypothalamus. Thus, we have identified reactive autoantibodies in human narcolepsy, providing evidence that narcolepsy is an autoimmune disorder. 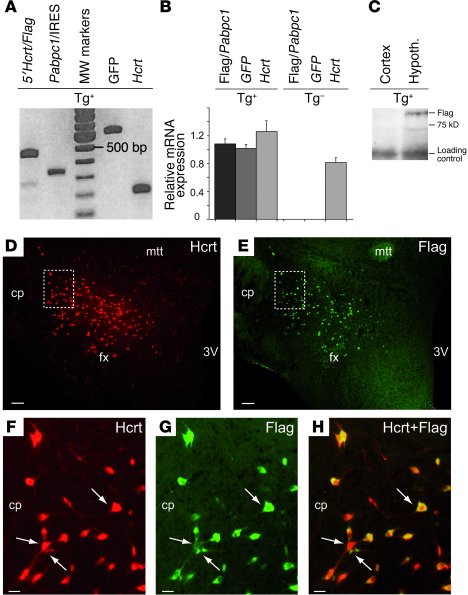 () RT-PCR experiments performed on total RNAs from a transgenic mouse hypothalamus (Tg+), showing the presence of both the construct and hypocretin () transcripts. Four different primer pairs were used, each generating a PCR fragment of the size predicted by its cDNA sequence: 5′ Hcrt/Flag (467 bp), Pabpc1/IRES (333 bp), GFP (611 bp), and Hcrt (189 bp). () Quantitative RT-PCR experiments showing similar relative RNA expression levels for Flag-tagged , , and in transgenic mice hypothalamus. Only the Hcrt transcript was detected in nontransgenic (Tg-) mouse hypothalamus as expected. The normalized relative values (+ 1 SD) obtained correspond to the mean values from 4 biological replicates per condition. () Western blot analysis demonstrating the presence of the Flag protein in the hypothalamic (hypoth.) extract (obtained from 3 transgenic mice) and its absence in the cortical fraction (from the same 3 mice). The loading control is a nonspecific band generated by the mouse monoclonal anti-Flag M2 antibody. Photomicrographs illustrating the distribution of ( and ) Hcrt- and ( and ) Flag-expressing cells on a coronal section from the tuberal hypothalamus. (–) Higher magnification views of the dashed regions in and confirm that Hcrt and Flag are coexpressed in the same neurons. Arrows indicate both single Hcrt or Flag or double Hcrt-Flag staining. Almost all Hcrt neurons were found to express the Flag-containing construct. () Merged image of and . cp, cerebral peduncle; fx, fornix; mtt, mammilo-thalamic tract; 3V, third ventricle. Scale bar: 100 μm ( and ); 20 μm (–).