Hereditary spastic paraplegias (HSPs; SPG1–45) are inherited neurological disorders characterized by lower extremity spastic weakness. More than half of HSP cases result from autosomal dominant mutations in atlastin-1 (also known as SPG3A), receptor expression enhancing protein 1 (REEP1; SPG31), or spastin (SPG4). The atlastin-1 GTPase interacts with spastin, a microtubule-severing ATPase, as well as with the DP1/Yop1p and reticulon families of ER-shaping proteins, and SPG3A caused by atlastin-1 mutations has been linked pathogenically to abnormal ER morphology. Here we investigated SPG31 by analyzing the distribution, interactions, and functions of REEP1. We determined that REEP1 is structurally related to the DP1/Yop1p family of ER-shaping proteins and localizes to the ER in cultured rat cerebral cortical neurons, where it colocalizes with spastin and atlastin-1. Upon overexpression in COS7 cells, REEP1 formed protein complexes with atlastin-1 and spastin within the tubular ER, and these interactions required hydrophobic hairpin domains in each of these proteins. REEP proteins were required for ER network formation in vitro, and REEP1 also bound microtubules and promoted ER alignment along the microtubule cytoskeleton in COS7 cells. A SPG31 mutant REEP1 lacking the C-terminal cytoplasmic region did not interact with microtubules and disrupted the ER network. These data indicate that the HSP proteins atlastin-1, spastin, and REEP1 interact within the tubular ER membrane in corticospinal neurons to coordinate ER shaping and microtubule dynamics. Thus, defects in tubular ER shaping and network interactions with the microtubule cytoskeleton seem to be the predominant pathogenic mechanism of HSP.

Endogenous REEP1 colocalizes with atlastin-1 and spastin in cerebral cortical neurons in culture. 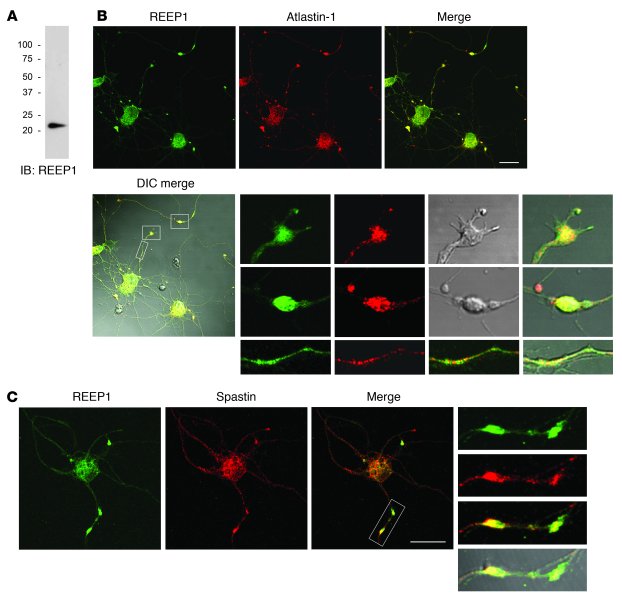