Persistent levels of IL-10 play a central role in progressive immune dysfunction associated with chronic viral infections such as HIV, but the underlying mechanisms are poorly understood. Because IL-10 affects the phenotypic and functional properties of DCs, which are responsible for initiating adaptive immune responses, we investigated whether IL-10 induces changes in DC phenotype and function in the context of HIV infection. Here, we show that IL-10 treatment of immature and mature human DCs in culture induced contrasting phenotypic changes in these populations: immature DCs exhibited aberrant resistance to NK cell–mediated elimination, whereas mature DCs exhibited increased susceptibility to NKG2D-dependent NK elimination. Treatment of immature and mature DCs with HIV resulted in potent IL-10 secretion and the same phenotypic and functional changes observed in the IL-10–treated cells. Consistent with these in vitro data, LNs isolated from individuals infected with HIV exhibited aberrant accumulation of a partially “immature” DC population. Together, these data suggest that the progressive immune dysfunction observed in chronic viral infections might be caused in part by IL-10–induced reversal of DC susceptibility to NK cell–mediated elimination, resulting in the accumulation of poorly immunogenic DCs in LNs, the sites of adaptive immune response induction. 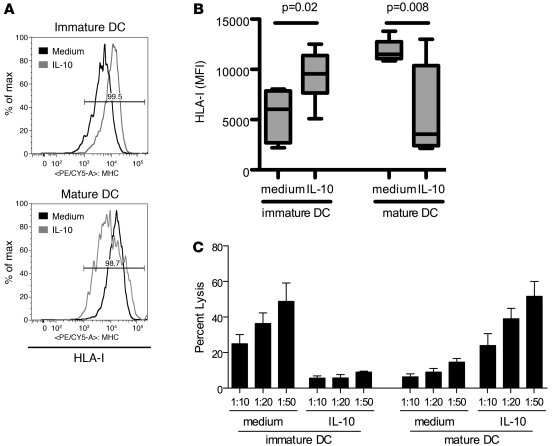 () Changes in MHC-I (i.e., MHC-A, -B, or -C) expression on the surface of immature and mature monocyte-derived DCs in the presence of medium alone or IL-10. () Box and whisker plot denotes median and range of MHC-I expression on immature and mature DCs in the presence or absence of IL-10 ( = 6 per group). () Mean ± SEM percent lysis of immature or mature DCs at 1:10, 1:20, and 1:50 effector/target ratios with NK cells after coculture with medium alone or with IL-10 (using 6 independent donors).