Type I IFN has been demonstrated to have major regulatory effects on the outcome of bacterial infections. To assess the effects of exogenously induced type I IFN on the outcome of Mycobacterium tuberculosis infection, we treated pathogen-exposed mice intranasally with polyinosinic-polycytidylic acid condensed with poly-l-lysine and carboxymethylcellulose (Poly-ICLC), an agent designed to stimulate prolonged, high-level production of type I IFN. Drug-treated, M. tuberculosis–infected WT mice, but not mice lacking IFN-αβ receptor 1 (IFNαβR; also known as IFNAR1), displayed marked elevations in lung bacillary loads, accompanied by widespread pulmonary necrosis without detectable impairment of Th1 effector function. Importantly, lungs from Poly-ICLC–treated M. tuberculosis–infected mice exhibited a striking increase in CD11b+F4/80+Gr1int cells that displayed decreased MHC II expression and enhanced bacterial levels relative to the same subset of cells purified from infected, untreated controls. Moreover, both the Poly-ICLC–triggered pulmonary recruitment of the CD11b+F4/80+Gr1int population and the accompanying exacerbation of infection correlated with type I IFN–induced upregulation of the chemokine-encoding gene Ccl2 and were dependent on host expression of the chemokine receptor CCR2. The above findings suggest that Poly-ICLC treatment can detrimentally affect the outcome of M. tuberculosis infection, by promoting the accumulation of a permissive myeloid population in the lung. In addition, these data suggest that agents that stimulate type I IFN should be used with caution in patients exposed to this pathogen. 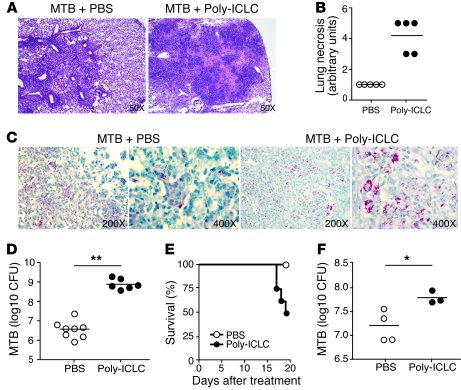