Deep vein thrombosis (DVT) is a major cause of pulmonary thromboembolism, a leading cause of death in individuals with DVT. Several lines of evidence indicate proinflammatory cytokines such as TNF-α are involved in thrombus formation and resolution, but the roles of IFN-γ remain unclear. To address this issue, we performed ligation of the inferior vena cava to induce DVT in WT and IFN-γ–deficient (Ifng–/–) mice. In WT mice, intrathrombotic IFN-γ levels were elevated progressively as the postligation interval was extended. Thrombus size was substantially smaller at 10 and 14 days in Ifng–/– mice than in WT mice. Intrathrombotic collagen content was remarkably reduced at more than 10 days after the ligation in Ifng–/– mice compared with WT mice. The expression and activity of MMP-9, but not MMP-2, was higher at the late phase in Ifng–/– mice than in WT mice. Moreover, intrathrombotic recanalization was increased in Ifng–/– mice, with enhanced Vegf gene expression, compared with that in WT mice. Activation of the IFN-γ/Stat1 signal pathway suppressed PMA-induced Mmp9 and Vegf gene expression in peritoneal macrophages. Furthermore, administration of anti–IFN-γ mAbs accelerated thrombus resolution in WT mice. Collectively, these findings indicate that IFN-γ can have detrimental roles in thrombus resolution and may be a good molecular target for the acceleration of thrombus resolution in individuals with DVT.

The effects of IFN-γ/Stat1 signal pathways on the gene expression of and on peritoneal macrophages. 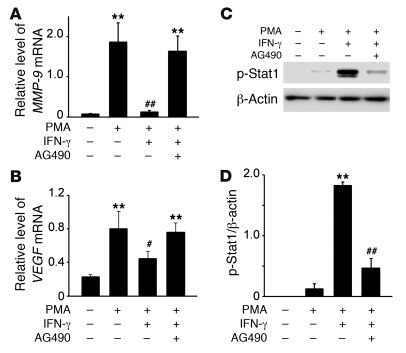