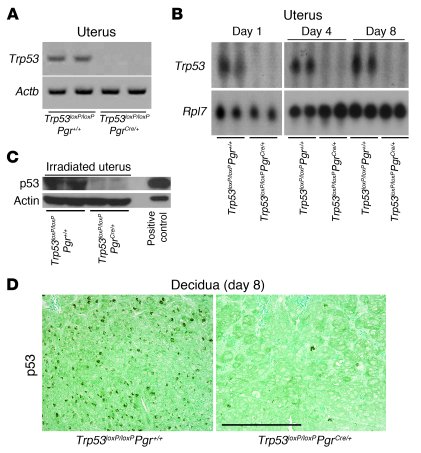 ( and ) mRNA was undetectable in 2-month-old uteri analyzed by RT-PCR () and Northern hybridization (). and were used as internal controls. () p53 protein levels were very low to undetectable in irradiation-induced 2-month-old uteri assessed by Western blotting. and dams were killed 6 hours after 9.5 Gy whole-body γ irradiation. Protein extracts from mouse lymphoma cell line WR19L were used as a positive control. () Immunostaining of p53 in and decidua on day 8 of pregnancy. Immunoreactive p53 was undetectable in decidua. Fast Green solution was used to counterstain the cytoplasm. Dark green-black staining shows nuclear p53 localization. Scale bar: 200 μm.