Most single-gene diseases, including muscular dystrophy, display a nonuniform phenotype. Phenotypic variability arises, in part, due to the presence of genetic modifiers that enhance or suppress the disease process. We employed an unbiased mapping approach to search for genes that modify muscular dystrophy in mice. In a genome-wide scan, we identified a single strong locus on chromosome 7 that influenced two pathological features of muscular dystrophy, muscle membrane permeability and muscle fibrosis. Within this genomic interval, an insertion/deletion polymorphism of 36 bp in the coding region of the latent TGF-β–binding protein 4 gene (Ltbp4) was found. Ltbp4 encodes a latent TGF-β–binding protein that sequesters TGF-β and regulates its availability for binding to the TGF-β receptor. Insertion of 12 amino acids into the proline-rich region of LTBP4 reduced proteolytic cleavage and was associated with reduced TGF-β signaling, decreased fibrosis, and improved muscle pathology in a mouse model of muscular dystrophy. In contrast, a 12-amino-acid deletion in LTBP4 was associated with increased proteolysis, SMAD signaling, and fibrosis. These data identify Ltbp4 as a target gene to regulate TGF-β signaling and modify outcomes in muscular dystrophy. 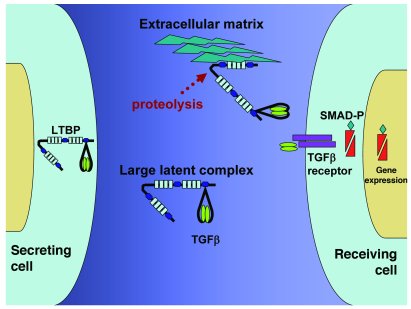