TLR ligands are promising candidates for the development of novel vaccine adjuvants that can elicit protective immunity against emerging infectious diseases. Adjuvants have been used most frequently to increase the quantity of an immune response. However, the quality of a T cell response can be more important than its quantity. Stimulating certain pairs of TLRs induces a synergistic response in terms of activating dendritic cells and eliciting/enhancing T cell responses through clonal expansion, which increases the number of responding T cells. Here, we have found that utilizing ligands for 3 TLRs (TLR2/6, TLR3, and TLR9) greatly increased the protective efficacy of vaccination with an HIV envelope peptide in mice when compared with using ligands for only any 2 of these TLRs; surprisingly, increased protection was induced without a marked increase in the number of peptide-specific T cells. Rather, the combination of these 3 TLR ligands augmented the quality of the T cell responses primarily by amplifying their functional avidity for the antigen, which was necessary for clearance of virus. The triple combination increased production of DC IL-15 along with its receptor, IL-15Rα, which contributed to high avidity, and decreased expression of programmed death–ligand 1 and induction of Tregs. Therefore, selective TLR ligand combinations can increase protective efficacy by increasing the quality rather than the quantity of T cell responses. 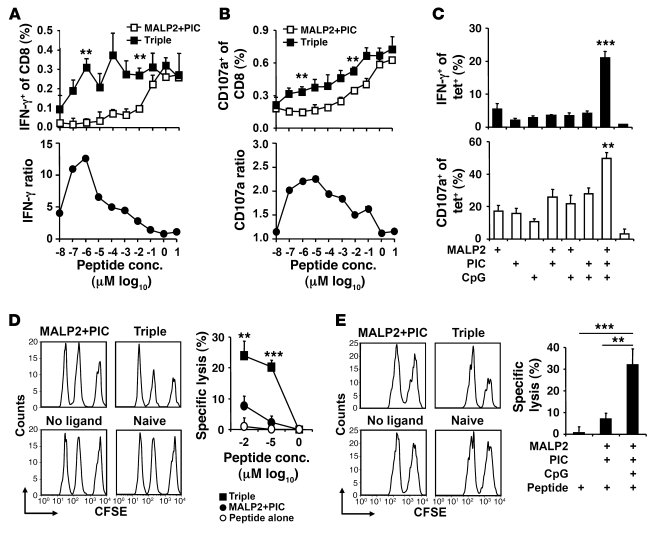 ( and ) Mice were immunized s.c. in the footpad with PCLUS3-IIIB and TLR ligands, and the LN cells were recovered at 5 days. Cells were stained with CD107a () upon restimulation with P18-I10 at various concentrations and stained for intracellular IFN-γ 5 hours after restimulation (). () Mice were immunized s.c. in the back flank with BM-DCs pretreated with TLR ligands and pulsed with P18-I10. Spleen cells were recovered at 1 month and restimulated with P18-I10 at 10–2 μM. IFN-γ and CD107a were measured 5 hours after restimulation. Values represent the percentage of tetramer+CD8+ T cells with the indicated function. Results represent 1 of 2 independent experiments with similar results. ( = 3). () s.c.-immunized mice received naive splenocytes as targets pulsed with difference concentrations of P18-I10 at 1 month after immunization. Amounts used in histograms are as follows: left, 0 μM; middle, 10–5 μM; right, 10–2 μM. In vivo–specific lysis of transferred targets in the spleen was assayed at 5 hours. () Splenocytes isolated from the immune mice were restimulated in vitro with 10–2 μM of P18-I10 for 5 days and examined for their ex vivo 4-hour killing activity on vPE-16-infected P815 cells. Results represent 1 of 2 independent experiments and are shown as mean ± SEM. ** < 0.01; *** < 0.001.