Although the modulation of ion channel gating by hormones and drugs has been extensively studied, much less is known about how cell surface ion channel expression levels are regulated. Here, we demonstrate that the cell surface density of both the heterologously expressed K+ channel encoded by the human ether-a-go-go–related gene (HERG) and its native counterpart, the rapidly activating delayed rectifier K+ channel (IKr), in rabbit hearts in vivo is precisely controlled by extracellular K+ concentration ([K+]o) within a physiologically relevant range. Reduction of [K+]o led to accelerated internalization and degradation of HERG channels within hours. Confocal analysis revealed colocalization between HERG and ubiquitin during the process of HERG internalization, and overexpression of ubiquitin facilitated HERG degradation under low [K+]o. The HERG channels colocalized with a marker of multivesicular bodies during internalization, and the internalized HERG channels were targeted to lysosomes. Our results provide the first evidence to our knowledge that the cell surface density of a voltage-gated K+ channel, HERG, is regulated by a biological factor, extracellular K+. Because hypokalemia is known to exacerbate long QT syndrome (LQTS) and Torsades de pointes tachyarrhythmias, our findings provide a potential mechanistic link between hypokalemia and LQTS.

The [K+]o of the incubation medium dictates amplitude of the HERG current. 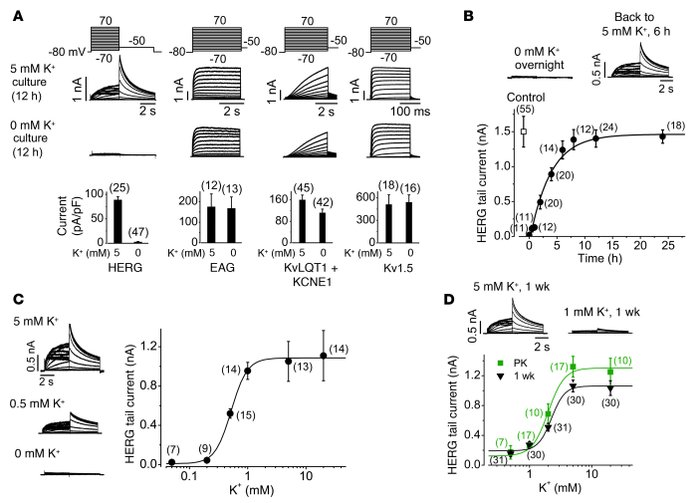 () Effects of overnight exposure to 0 mM K+ MEM on the HERG, EAG, KvLQT1 plus KCNE1, and Kv1.5 channel currents. Voltage protocols are shown above the current traces, and the relative reductions of various channel currents are shown below. Current amplitude was measured by tail current at –50 mV after 50-mV depolarizing steps for the HERG channel, or by pulse current at the end of a depolarizing step to 70 mV for the EAG, KvQLT1 plus KCNE1, and Kv1.5 channels. () Time-dependent recovery of IHERG in 5 mM K+ MEM from overnight exposure to 0 mM K+ MEM. () Concentration-dependent effects of K+o on IHERG after overnight culture. () Concentration-dependent effects of K+o on IHERG after 1 week culture of HERG-HEK cells (black) or after 32–36 hours of culture of proteinase K–treated HERG-HEK cells (PK; green). All HERG currents shown in – were recorded using the same voltage protocol as in . Numbers in parentheses denote from at least 3 independent experiments.