Viruses that infect T cells, including those of the lentivirus genus, such as HIV-1, modulate the responsiveness of infected T cells to stimulation by interacting APCs in a manner that renders the T cells more permissive for viral replication. HIV-1 and other primate lentiviruses use their Nef proteins to manipulate the T cell/APC contact zone, the immunological synapse (IS). It is known that primate lentiviral Nef proteins differ substantially in their ability to modulate cell surface expression of the TCR-CD3 and CD28 receptors critical for the formation and function of the IS. However, the impact of these differences in Nef function on the interaction and communication between virally infected T cells and primary APCs has not been investigated. Here we have used primary human cells to show that Nef proteins encoded by HIV-2 and most SIVs, which downmodulate cell surface expression of TCR-CD3, disrupt formation of the IS between infected T cells and Ag-presenting macrophages or DCs. In contrast, nef alleles from HIV-1 and its simian precursor SIVcpz failed to suppress synapse formation and events downstream of TCR signaling. Our data suggest that most primate lentiviruses disrupt communication between virally infected CD4+ Th cells and APCs, whereas HIV-1 and its SIV precursor have largely lost this capability. The resulting differences in the levels of T cell activation and apoptosis may play a role in the pathogenesis of AIDS. 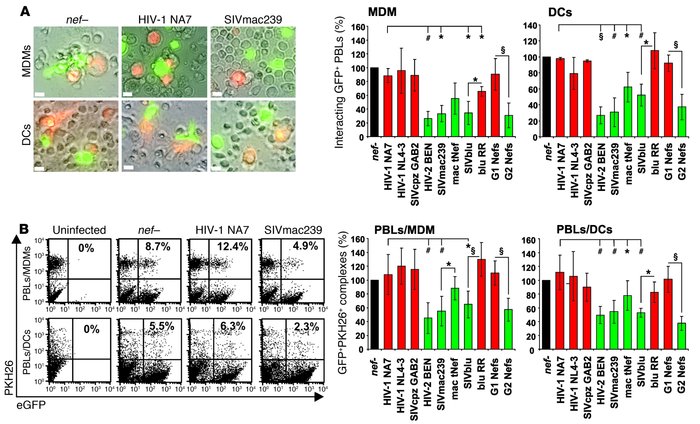