The traditional view is that cancer cells predominately produce ATP by glycolysis, rather than by oxidation of energy-providing substrates. Mitochondrial uncoupling — the continuing reduction of oxygen without ATP synthesis — has recently been shown in leukemia cells to circumvent the ability of oxygen to inhibit glycolysis, and may promote the metabolic preference for glycolysis by shifting from pyruvate oxidation to fatty acid oxidation (FAO). Here we have demonstrated that pharmacologic inhibition of FAO with etomoxir or ranolazine inhibited proliferation and sensitized human leukemia cells — cultured alone or on bone marrow stromal cells — to apoptosis induction by ABT-737, a molecule that releases proapoptotic Bcl-2 proteins such as Bak from antiapoptotic family members. Likewise, treatment with the fatty acid synthase/lipolysis inhibitor orlistat also sensitized leukemia cells to ABT-737, which supports the notion that fatty acids promote cell survival. Mechanistically, we generated evidence suggesting that FAO regulates the activity of Bak-dependent mitochondrial permeability transition. Importantly, etomoxir decreased the number of quiescent leukemia progenitor cells in approximately 50% of primary human acute myeloid leukemia samples and, when combined with either ABT-737 or cytosine arabinoside, provided substantial therapeutic benefit in a murine model of leukemia. The results support the concept of FAO inhibitors as a therapeutic strategy in hematological malignancies. 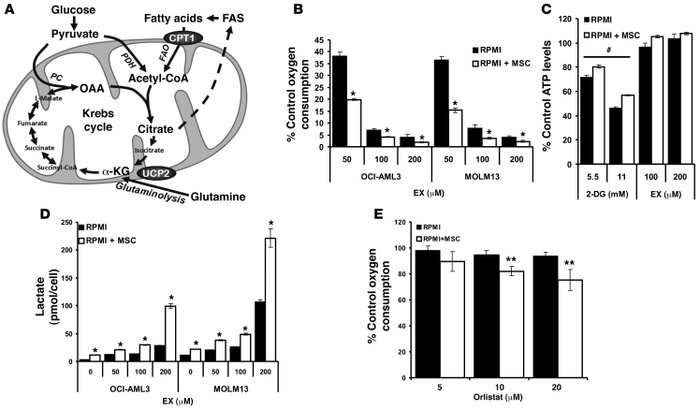