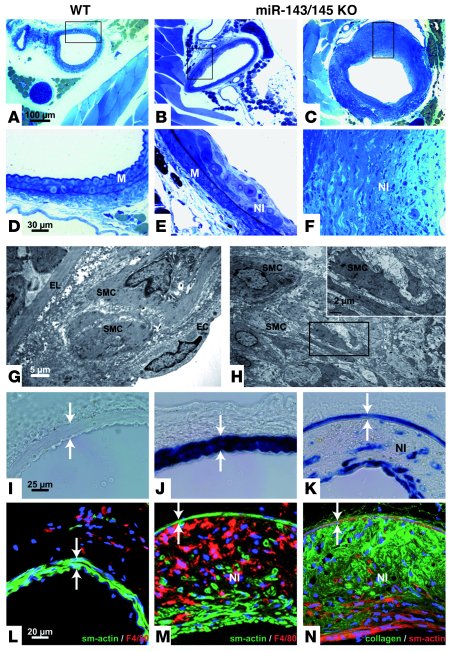 (–) Sections of WT () and KO ( and ) femoral arteries are shown (scale bar, 100 μm); boxed regions are magnified in – (scale bar, 30 μm). Electron micrographs of early and late lesions are shown in and , respectively. Scale bars: 5 μm (), 2 μm (, inset). (–) Femoral artery of WT (), heterozygous (), and homozygous animals () stained for β-galactosidase activity to indicate miR-143/145 locus activity (scale bar, 25 μm). ( and ) Sections of WT () and KO vessels (). Sections of the femoral artery stained with antibodies against α-SMA or the macrophage marker F8/40. () Sections of the femoral artery stained with antibodies against α-SMA and collagen I. Scale bar: 20 μm (–). Lesions were frequently found in KO animals but not in WT animals. () Formation of neointima with SMCs and macrophages (not shown) between the lamina elastica and endothelial cells. Lesions at later stages reached large volumes and showed a thinned media (–, arrows) but no constriction of the vessel. Note the absence of foam cells or lipophilic inclusions ( and ), which was also indicated by the absence of Sudan IV staining (not shown). SMCs were recognized by morphology ( and ), by anti–smooth muscle staining ( and ), or by transgene expression under the control of the miR-143/145 locus (). The plaques contain macrophages identified by the F4/80 marker () and deposits of amorphous collagen (). Smooth muscle () and macrophages were also identified in early lesions (not shown). EL, elastic lamina; NI neointima. Scale bars: 25 μm (–); 20 μm (–).