Smad4 is a central mediator of TGF-β signaling, and its expression is downregulated or lost at the malignant stage in several cancer types. In this study, we found that Smad4 was frequently downregulated not only in human head and neck squamous cell carcinoma (HNSCC) malignant lesions, but also in grossly normal adjacent buccal mucosa. To gain insight into the importance of this observation, we generated mice in which Smad4 was deleted in head and neck epithelia (referred to herein as HN-Smad4–/– mice) and found that they developed spontaneous HNSCC. Interestingly, both normal head and neck tissue and HNSCC from HN-Smad4–/– mice exhibited increased genomic instability, which correlated with downregulated expression and function of genes encoding proteins in the Fanconi anemia/Brca (Fanc/Brca) DNA repair pathway linked to HNSCC susceptibility in humans. Consistent with this, further analysis revealed a correlation between downregulation of Smad4 protein and downregulation of the Brca1 and Rad51 proteins in human HNSCC. In addition to the above changes in tumor epithelia, both normal head and neck tissue and HNSCC from HN-Smad4–/– mice exhibited severe inflammation, which was associated with increased expression of TGF-β1 and activated Smad3. We present what we believe to be the first single gene–knockout model for HNSCC, in which both HNSCC formation and invasion occurred as a result of Smad4 deletion. Our results reveal an intriguing connection between Smad4 and the Fanc/Brca pathway and highlight the impact of epithelial Smad4 loss on inflammation. 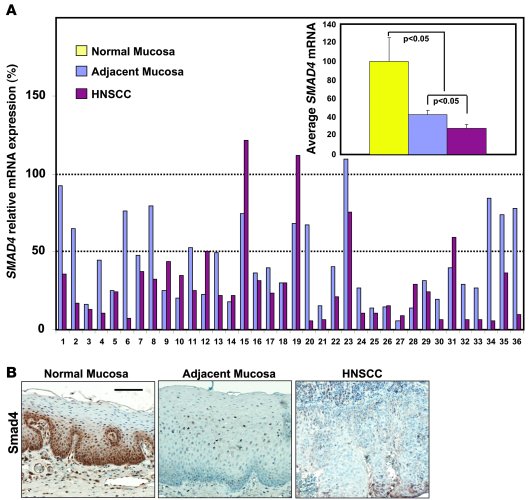