Humans have been colonized by Helicobacter pylori for at least 50,000 years and probably throughout their evolution. H. pylori has adapted to humans, colonizing children and persisting throughout life. Most strains possess factors that subtly modulate the host environment, increasing the risk of peptic ulceration, gastric adenocarcinoma, and possibly other diseases. H. pylori genes encoding these and other factors rapidly evolve through mutation and recombination, changing the bacteria-host interaction. Although immune and physiologic responses to H. pylori also contribute to pathogenesis, humans have evolved in concert with the bacterium, and its recent absence throughout the life of many individuals has led to new human physiological changes. These may have contributed to recent increases in esophageal adenocarcinoma and, more speculatively, other modern diseases.

Overviews of relationships to health and disease. 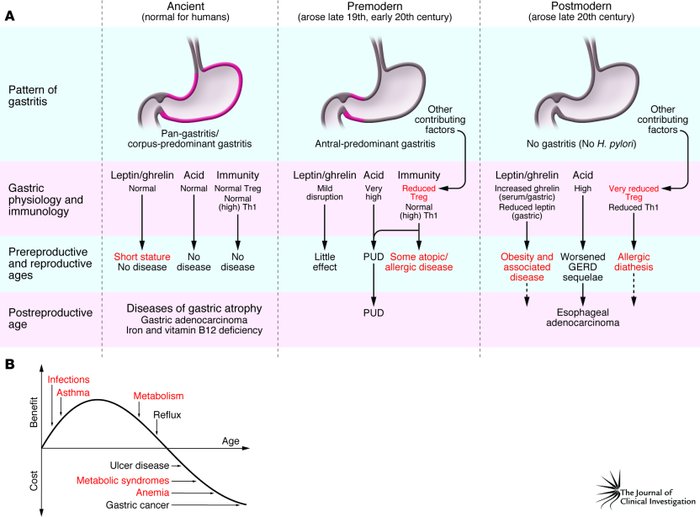 () Ancient, premodern, and postmodern stomachs. From ancient times, normal human physiology in the presence of pan-gastritis has avoided disease until the gastric cancers of old age. We speculate that premodern changes in the pattern of colonization and inflammation in the stomach resulted in changes in physiology and the rise of peptic ulcer disease (PUD). In the postmodern (current) era, the absence of leads to distorted physiology, to which we have not fully adapted. This may have led to disease in some children and adults but avoids gastric cancer in old age. () A model of the proposed biphasic nature of and human disease. Because we have coevolved with , the changed physiology resulting from an free stomach may contribute to some modern diseases. Thus, from a postmodern viewpoint, may confer benefits to humans early in their life span. Possible examples include reducing infectious diseases, controlling allergy, regulating gastric hormones such as leptin and ghrelin (benefits uncertain), and reducing gastroesophageal reflux disease sequelae. Later in life, has biological costs, inducing ulcers, (possible) metabolic disturbances, anemia, and gastric cancers, all more prominent in an ageing population. In both and , black text indicates information for which there is strong evidence — for these, the balance is toward a net deleterious effect of on human health — and red text indicates information for which evidence remains under debate. -negative strains are less interactive with humans, conferring smaller risks and putative benefits.