Autism spectrum disorder (ASD) is a common neurodevelopmental disorder with high heritability. Here, we discuss data supporting the view that there are at least two distinct genetic etiologies for ASD: rare, private (de novo) single gene mutations that may have a large effect in causing ASD; and inherited, common functional variants of a combination of genes, each having a small to moderate effect in increasing ASD risk. It also is possible that a combination of the two mechanisms may occur in some individuals with ASD. We further discuss evidence from individuals with a number of different neurodevelopmental syndromes, in which there is a high prevalence of ASD, that some private mutations and common variants converge on dysfunctional ERK and PI3K signaling, which negatively impacts neurodevelopmental events regulated by some receptor tyrosine kinases. 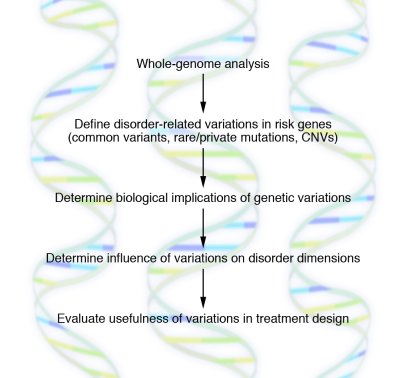 These approaches include whole-genome analyses that identify disorder-related sequences or CNVs in genes that exhibit preferential inheritance patterns or de novo appearance in individuals with ASD. The current challenges include the translation of these genetic findings to define the biological consequences of the variations, to determine the influence on defined clinical phenotypes of ASD, and eventually to design new intervention strategies.