Phase II clinical trials revealed that the lymphocyte-depleting humanized monoclonal antibody alemtuzumab (Campath-1H) is highly effective in the treatment of early relapsing-remitting multiple sclerosis. However, 30% of patients develop autoimmunity months to years after pulsed exposure to alemtuzumab, usually targeting the thyroid gland and, more rarely, blood components. In this study, we show that autoimmunity arose in those patients with greater T cell apoptosis and cell cycling in response to alemtuzumab-induced lymphocyte depletion, a phenomenon that is driven by higher levels of IL-21. Before treatment, patients who went on to develop secondary autoimmunity had more than 2-fold greater levels of serum IL-21 than the nonautoimmune group. We suggest that serum IL-21 may, therefore, serve as a biomarker for the risk of developing autoimmunity months to years after alemtuzumab treatment. This has implications for counseling those patients with multiple sclerosis who are considering lymphocyte-depleting therapy with alemtuzumab. Finally, we demonstrate through genotyping that IL-21 expression is genetically predetermined. We propose that, by driving cycles of T cell expansion and apoptosis to excess, IL-21 increases the stochastic opportunities for T cells to encounter self antigen and, hence, for autoimmunity. 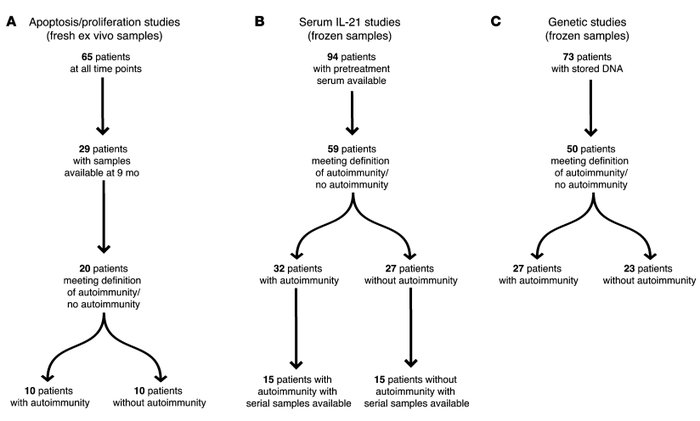