γ-Retroviral vectors (γRVs), which are commonly used in gene therapy, can trigger oncogenesis by insertional mutagenesis. Here, we have dissected the contribution of vector design and viral integration site selection (ISS) to oncogenesis using an in vivo genotoxicity assay based on transplantation of vector-transduced tumor-prone mouse hematopoietic stem/progenitor cells. By swapping genetic elements between γRV and lentiviral vectors (LVs), we have demonstrated that transcriptionally active long terminal repeats (LTRs) are major determinants of genotoxicity even when reconstituted in LVs and that self-inactivating (SIN) LTRs enhance the safety of γRVs. By comparing the genotoxicity of vectors with matched active LTRs, we were able to determine that substantially greater LV integration loads are required to approach the same oncogenic risk as γRVs. This difference in facilitating oncogenesis is likely to be explained by the observed preferential targeting of cancer genes by γRVs. This integration-site bias was intrinsic to γRVs, as it was also observed for SIN γRVs that lacked genotoxicity in our model. Our findings strongly support the use of SIN viral vector platforms and show that ISS can substantially modulate genotoxicity.

Transduction of HSPC by chimeric vectors and tumor development in transplanted mice. 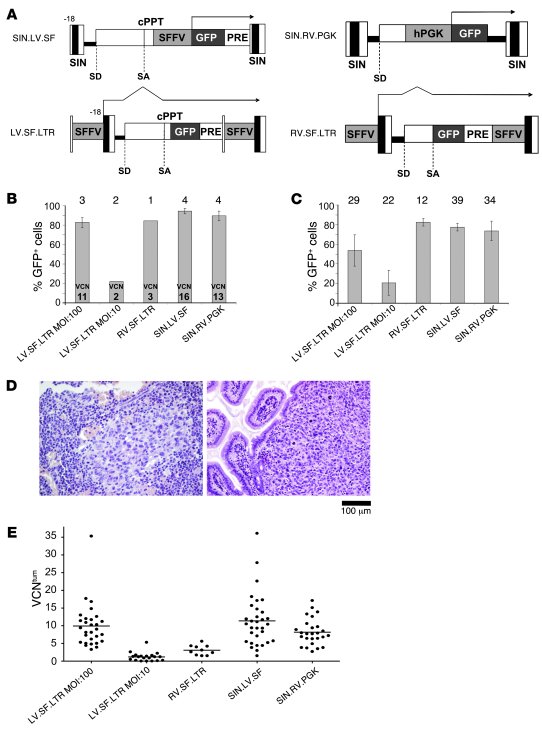 () Scheme of the proviral forms of the vectors tested. SIN, SIN LTR with deletion of the U3 region; SFFV, enhancer/promoter of the SF U3 LTR; PGK, promoter of the human phosphoglycerate kinase gene; SD and SA, viral splice donor/acceptor sites; cPPT, central polypurine tract; PRE, posttranscriptional regulatory element from the woodchuck hepatitis virus. Transgene transcripts are indicated by arrows. () Percentage of GFP+ (mean ± SD) ––/– cells transduced in vitro with the indicated vectors 6 days after transduction. Number of experiments indicated on top. The average VCN per cell measured by Q-PCR 14 days after transduction is indicated inside the bar. () Percentage of GFP+ cells (mean ± SD) in the blood of transplanted mice at 6–8 weeks after transplant. Number of mice indicated on top. () Representative H&E-stained sections of BM (left panel) and gut (right panel) from a myeloid tumor in the RV.SF.LTR group. Original magnification, ×20. Scale bar: 100 μm. () VCN distribution in tumor-infiltrated (VCNtum) tissue (BM, spleen or thymus) for each mouse analyzed (dots) among the different treatment groups. Horizontal line represents the average VCN for each group.